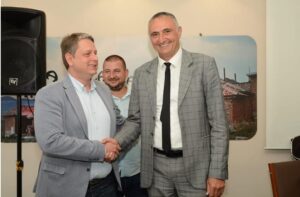 The President of the Association and the Union of Montenegrins of Kosovo, Slobodan M. Vujicic, sent an open letter to Serbian President Aleksandar Vucic, calling on him to fulfill an obligation allegedly assumed on his behalf and on behalf of the state by Srpska Lista Vice-President Milan Radoicic and Liaison Officer Dejan Pavicevic in 2019, after Vujicic and his associates gave their support to SL in the then Kosovo parliamentary elections. In return, Vujicic claims, Kosovo Montenegrins were allegedly promised support in gaining constitutional recognition, which they had not received to date.

„As citizens of Serbia, we call on you to finally fulfill the obligations from 2019, which were assumed by the liaison officer, Dejan Pavicevic, and the Srpska Lista Vice-President, Milan Radoicic, on your behalf and behalf of the state during the parliamentary elections in Kosovo,“ Vujicic wrote in an open letter to the Serbian president.

According to Vujicic, Montenegrins gave their support to Srpska Lista in the 2019 elections. He recalled that in October 2019, the Union of Serbs and Montenegrins was founded at a joint gathering in Gracanica, headed by him – out of three Montenegrin associations. At this gathering, these Montenegrins publicly supported Srpska Lista and called on their members to vote for this party, while Serb liaison officer Dejan Pavicevic supported them at the same gathering.

Pavicevic on the unbreakable bond between Serbs and Montenegrins

„I speak from the heart, my heart which is full of joy due to something Mr. Vujicic said – that we should unite around religion and language. There is an unbreakable bond between Serbs and Montenegrins that many are trying to break, especially linguistically and religiously. Those people who are trying to cause trouble and destroy the bond between Serbs and Montenegrins are the biggest scum, as are all of those who recorded some videos there… Support for SL is not just political support. It is also a message, a message of unity, and a message that we stand together. You should know that Belgrade and Serbia will never turn their backs on Montenegrins who still believe in their ancestors, in valor and heroism, and what Montenegro really is. Just as we protect the interests of every Serb, so we will protect the interests of every Montenegrin,“ Pavicevic said at the time.

Vujicic now claims that on the eve of the October 2019 elections, Kosovo Montenegrins were allegedly promised support in gaining constitutional recognition.

According to this agreement, Vujicic writes, immediately after the formation of the Kosovo government in 2019, Srpska Lista was supposed to publicly declare its support of the Strategy for Integration and Affirmation of the Montenegrin Community – that is, support of the constitutional recognition of this community in Kosovo.

„Dear President Vucic, according to the 2019 pre-election agreement, the implementation of the mentioned strategy and the resolution of our formal legal position were priority points that you should have supported immediately after the formation of the Government of Kosovo. Unfortunately, you did not respect the agreement, thus directly endangering our survival and the overall position in this region,“ writes Vujicic.

„For the sake of the general public and the truth, we must remind you that Srpska Lista won 10 parliamentary seats in the Assembly of Kosovo for the first time that year, among other things, thanks to our support,“ Vujicic added in his open letter.

However, the deal was allegedly not honored, thus „directly endangering“ the survival and the overall position of the Montenegrin people in Kosovo, Vujicic alleges.

Unfortunately, you did not honor the agreement, which directly endangered our survival and overall position in this region

In his words, the Montenegrin organization and community “have lost everything within Kosovo’s institutions with a tendency for greater losses and suffering“ because they „responded to the appeals“ of the President of Serbia and made a „significant contribution to the absolute victory of Srpska Lista“:

„On the other hand, you got everything, and instead of gratitude on your part, we faced obstructions regarding the implementation of ‘the Strategy for Integration and Affirmation of the Montenegrin Community’ as well as a complete blockade of our constitutional and legal recognition, which is not possible without the support of Serb MPs in the Kosovo Assembly, as you well know,“ Vujicic told the President of Serbia.

On the other hand, he also claimed that the President of Serbia has been „giving unreserved support to Thaci, Haradinaj, and Veseli“ for a decade.

„All three performed the highest state functions exclusively thanks to the votes of SL in the Assembly of Kosovo,“ he specified.

„It is indicative that you abused us and lured us into a trap that aims to completely destroy the Montenegrin community in Kosovo, while, you have been giving your unreserved support to Thaci, Haradinaj and Veseli for a decade. All three performed the highest state functions exclusively thanks to the votes of SL in the Assembly of Kosovo.“

In a subsequent statement to KoSSev, Vujicic states that Srpska Lista, in addition to not supporting the strategy for affirmation and constitutional recognition of the Montenegrin community, was also against preserving the Development Center of Montenegrins in Kosovo and „against comprehensive preservation of cultural and overall identity because they refuse to support any project of that kind.“

He used the occasion to address Srpska Lista chief, Goran Rakic, emphasizing that the answer allegedly never came from Rakic.

Vujicic also stated that Rakic „complained“ to Milan Radoicic, who is the vice president of this party.

„Afterwards, Milan called me from Rakic’s number and said that I should not write to him anymore, even though Rakic is the president of SL and the minister for returns and communities,“ claims Vujicic.

Speaking of the liaison officer in Pristina, Dejan Pavicevic, Vujicic states that despite his words at the gathering of this union in 2019 in Gracanica, when the Montenegrin community in Kosovo promised support to SL, he „only deceived“ them later on. Vujicic also added that this top Serbian state official allegedly „complained that he was afraid of Milan (Radoicic)“.

Despite multiple inquires we sent on Tuesday, by the time this news was published, the KoSSev portal received no reply – confirmation or denial – from either Srpska Lista or Belgrade regarding this matter.

After failing to get in touch with the liaison officer Dejan Pavicevic, we contacted the press service of the Kosovo Office, but no answer has arrived so far.

The chief of Srpska Lista and the Kosovan Minister, Goran Rakic, did not answer our calls, or written inquiries, neither did the SL Vice-President Milan Radoicic.