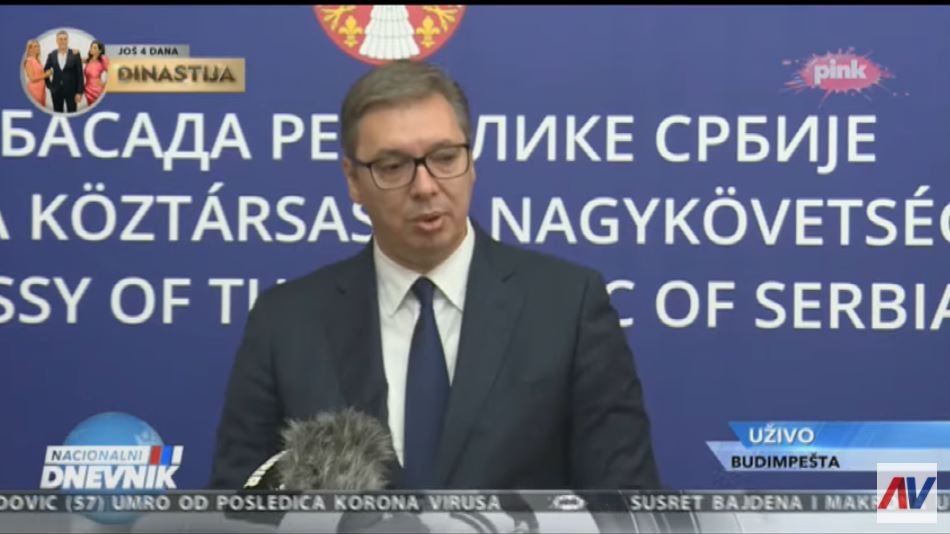 „I am very concerned over the beating of Serbs, but the question is why both NATO and the EU are allowing this to happen,“ the Serbian President, Aleksandar Vucic reacted to today’s news that special units of the Kosovo police physically assaulted three Serbs in the municipality of Zubin Potok.

As a group of Serbs continues to block the roads to Brnjak and Jarinje crossings in the north of Kosovo because the Kosovo government decided to start implementing the reciprocity measures for Serbian license plates, Vucic declares that the Serbian government has made clear how much longer it will put up with the “violence” of Kosovan Prime Minister, Albin Kurti, and the Kosovan special forces.

„Both Europeans and Americans are aware of this, we pointed it out very, very, very precisely,“ the Serbian president said, noting that the Serbian side also highlighted the moves it will be making in the upcoming period:

„I expect an urgent meeting of the Management Team for the ASM tomorrow, I hope we will not wait the next 9 years,“ said Vucic.

He proceeded to describe the European representatives’ acceptance of the „dubious“ interpretation of the agreement on freedom of movement from 2011, and „some annex“ from 2016 as “hypocritical”.

„My question for all of them reads: Why are you demolishing, removing, tearing and at the same time arresting people who behave unequivocally in accordance with the Brussels Agreement and who are setting up billboards, or posters, with the inscription of the Association of Serb-majority Municipalities, since it is indisputable that the ASM refers to 10 municipalities with a Serb majority, except for Plemetina, Priluzje and Babin Most,“ Vucic argued.

„When you need something, then you can use half-information and half-rules from the buffet, abuse them in the worst way, take unilateral actions and occupy the north, let’s be frank – that is what you’re doing,“ the Serbian president said from Budapest today.

They can do all of that, but when it comes to actually fulfilling the Brussels Agreement, then they arrest people because they can, the Serbian president emphasized, while also claiming that EULEX will also help them with that.

Vucic in 2018: We will not be accepting the ASM, which will be presented to us as the final solution

When August 4th, 2018, was the deadline for the drafting of the Statute of the ASM, which the Management Team purportedly worked on, the Serbian president claimed at the time that the ASM would not come to be, because Albanians do not want that, but also because he will not accept the fact that the ASM is being presented as a „final solution“.

„I’m not clairvoyant, but I know them. I know these people, I have sat with them a hundred times – with these Albanians and with people from Europe. I know them, that is not going to happen (cf. the ASM), they don’t want it. They want to present it to us as a final solution, they also have their espionage networks in Belgrade, which are supposed to present it to us as a final solution, for us to be happy that we will get the ASM and say – that is the final solution – that won’t do. It won’t happen,” the President of Serbia declared at the time.

The situation is difficult now and hypocrisy is rampant, the president explained.

Speaking about the Kosovan Prime Minister, Vucic said that Kurti and principles are two different things, noting that this is even more evident when it comes to those who support Kurti.

I expected no better from him – Vucic stressed.

The Serbian president highlighted the courage of Kosovo Serbs at the barricades.

„If any attempts are made to physically endanger them, like the ones we had in 2004, or attempts at persecution like in ’95 in RS – that will not happen,“ President Aleksandar Vucic concluded.