"There is a decisive and difficult period for our country, citizens and people ahead of us in the next few months", conveyed Serbian President Aleksandar Vucic today.

We are fighting, he further said, in an impossible atmosphere, when everything is out of our hands:

"So, you are between the ropes where you were already well beaten in 2004, you are tired of such beatings, and in the ‘90s you left your left arm, do not move it and have difficulties walking with your right leg. And then in 2008 someone tied you to the ropes in the corner, and then in 2010 and 2001 someone put bandaids on your mouth, so you cannot say anything anymore according to the International Court of Justice decision, so you between the ropes and with bandaids, your arms and legs in casts, have to fight the toughest fighters on the planet.”

After a series of media reports on “pressures against Serbia” regarding Kosovo, the President conveys: “I am expecting major and significant pressures and I am expecting us to try and reach a compromise solution.”

But, he is afraid that, as he says, “many throughout the world view compromise as something representing their own will and their own decision.”

Still, he adds, it remains to be seen what is to be offered to Serbia as a compromise, and only then will the decisions regarding Kosovo will be made.

Answering further to a journalist’s question regarding the latest media reports that Great Britain could, once it takes over the UN SC presiding position, hold Kosovo sessions behind closed doors – which would transfer the Kosovo issue to the ‘procedural issues’ corps, so Russia and China would be unable to use their veto – Vucic said “this is nothing new.” He is expecting “open support” from Russia, which had “helped Serbia twice already.”

"Great Britain, U.S., France and all those who have recognized Kosovo are trying to make it happen for a long time. They say there are no problems, no need for quarterly and six-month reports, that we should not have plenary sessions, that we should go with other formats. They have been working on it for a long time. From their viewpoint, their job with Kosovo has already been done,” the Serbian President explained.

On the issue of the UN SC change of format, Vucic added he would talk with “Chinese friends” too.

"We are fighting as hard as we can. People must understand that. We have had very difficult talks in Skopje, as you have seen in course of the Brdo-Brioni process. We are facing a situation where whatever you do will make you repent, and whatever you make of it is not good.”

Explaining further, he resorted to a soccer terminology, saying:

"I know how hard it is to tell someone in Serbia anything, since if two people sit together in any coffee shop in Belgrade: ‘Hey, man, this Mourinho is as dumb as a drum. He has no idea about football, and that Guardiola has no idea. Did you see how he…”, and you can only imagine what they might think of some Vucic, since Kosovo belongs to us for a million years, and they could always negotiate it way better.”

He adds that he is very grateful to the UN SG Antonio Gutieres, whose latest report on Kosovo according to him demonstrates that “the truth cannot really be hidden as well as they tried, no matter how biased or partial they might be towards parts of the international community.” 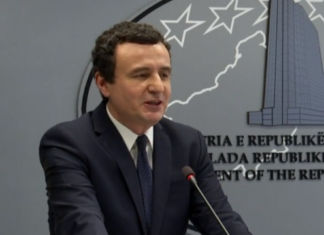