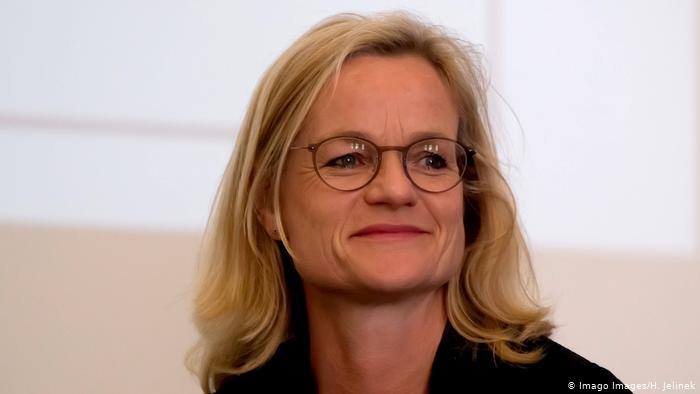 “Not for a single moment we discussed the internal organization of the Serbian Orthodox Church, nor questioned its autocephaly and unity,” Viola von Cramon said today, confirming Bishop Grigorije’s statement from last night.

A single reply by Viola von Cramon to her own tweet shared following her Monday meeting with Bishop Grigorije drew a lot of heat in the public in the last few days, even though it was quickly deleted.

Today, once again, the harshest headlines can be read in the pro-governmental media and tabloids:

„Grigorije and the Albanian lobbyist want to break up the Serbian church“; „Viola von Cramon: Gregory told me that the SOC no longer exists“, „THE SERBIAN CHURCH IS A THORN IN THE EYE OF THE WEST, ITS BREAK UP IS OF STRATEGIC IMPORTANCE TO THEM! Viola made a mistake that the SOC does not exist or are the motives even MORE DANGEROUS?!”

Bishop Grigorije and the rapporteur of the European Parliament for Kosovo, Viola von Cramon, met on Monday at the seat of the SOC diocese in Dusseldorf, Germany.

“Constructive and open discussion with Bishop Grigorije, Serbian Orthodox Church diocese of Düsseldorf and all of Germany, on common challenges and inter-religious dialogue in the Western Balkans and Germany,” Viola von Cramon tweeted after the meeting, while also sharing a photo with Bishop Grigorije.

The panel in front of which they were photographed contains the SOC logo and its name in two languages – Serbian and German „Serbian Orthodox Church, Diocese of Dusseldorf-Germany“.

This post triggered an avalanche of comments, mostly negative, coming from both Albanians and Serbs. While the Albanians criticized the Church and Serbia, the Serbs either defended or attacked the Bishop and the European MP, claiming that they are not protecting Serb interests.

When von Cramon tried to respond to the criticism of one user that the „SOC is a pro-Russian entity“, saying that the structure of dioceses within the SOC is rather more independent, she also tweeted the following:

„There is no ‘the Serbian Orthodox Church’, these are very autonomous dioceses, different to the Catholic Church. Speak to the Bishop and you will be surprised.“

She deleted this tweet in the meantime. However, it was too late, as it had already reached the headlines.

„SCANDAL Viola von Cramon abolished the SOC“, Viola von Cramon: „There is no Serbian Orthodox Church“, „Grigorije is the greatest disgrace of the SOC: He met with Viola, the main lobbyist for INDEPENDENT KIM (PHOTO)“ – read some of the tabloid headlines published at the time.

Vucic: Every smart person can understand how von Cramon concluded that the SOC does not exist

Von Cramon “did everything to destroy Serbia”, and you can “deduce how she concluded that the Serbian Orthodox Church does not exist”, the Serbian president said yesterday. Vucic, however, also noted that he „does not have to say anything more“ because, in his words, every smart person can understand this very well.

Last night, the Serbian Orthodox Church reacted, saying that the SOC exists in Germany as part of one, indivisible autocephalous Serbian Patriarchate, and its Constitution is valid everywhere.

“On the basis of the Constitution of the Serbian Orthodox Church, the competent church authorities appoint and dismiss the administrations of all bodies and organs, and the Holy Assembly of Bishops appoints and, if necessary, relieves the diocesan bishop,” reads yesterday’s press release of the SOC.

„We have been informed via the media about the content of the published and deleted commentary of Ms. von Cramon regarding the structural organization of the Serbian Orthodox Church. Without wanting to engage in further speculation about the interpretation of her personal position, and in order to prevent potential confusion of the interested public, we emphasize once again that we did not discuss such topics during the talk, and that we fully agree with the statement of the SOC Information Service regarding the position of our diocese within our Church,“ he said.

Finally, three days after posting the tweet that triggered these reactions, Von Cramon reacted, thanking the Bishop once again for the „constructive talk“.

„Indeed, not for a single moment we discussed the internal organization of the Serbian Orthodox Church, nor questioned its autocephaly and unity,“ she tweeted.

Von Cramon added that she remains firmly committed to inter-faith dialogue and that she appreciates the valuable contribution of religious leaders such as Bishop Grigorije in that respect.

On the other hand, she also noted that her message „was intended to reiterate the beauty of plurality of opinions and approaches within the one, indivisible Serbian Orthodox Church.“