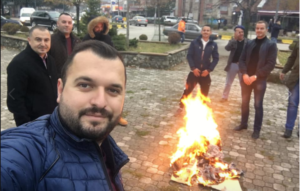 A deputy in the Kosovo Assembly and a council member in the Decani municipality assembly, both members of Kosovo Prime Minister, RamushHaradinaj’s AAK party, were among the group of people who decided to celebrate the increase to 100% the tax onimports of Serbian goods by burning Serbian products.

The Kosovo government introduced a 100% taxon the products imported from Serbia and Bosnia and Herzegovina on November 21st. Kosovo Serb political representatives assessed this decision as „an unofficial declaration of war to Serbia,“ while the EU, UNMIK, and the US embassy in Pristina criticized the Kosovo government.

However, news of the increase in customs duties on imports of goods from Serbia and BiH, especially those from Serbia, was well received by the majority community in Kosovo. They expressed the pleasurederived from this decision viabillboards, the cover pages of daily newspapers and, in some cases, by burning Serbian products. The decision to increase the customs duty on the import of goods from Serbia was made only a day before an extraordinary session of the Kosovo Assembly convened at the request of 42 deputies of the opposition to discuss „failures and scandals ofKosovo foreign policy“.

The Prime Minister commentedon these events in an interview he gave for RTK2. When asked by the journalist whether he felt responsible for the scenes of product burning, Haradinajreplied that he does not accept such scenes, which are not „Albanian“.

„I do not accept that, they are not Albanian, Kosovo scenes. I do not like that, nobody should do that, no one, that’s not okay,“ Haradinaj said.

Some Kosovo politicians also expressed their satisfaction with the increase of the tax to 100% by burning Serbian products. Two members of the Prime Minister’s Alliance for the Future of Kosovo party, Kosovo Assembly deputy, ShkumbinDemaliaj and a member of the local assembly in Decani, Rifat Stojkaj, documented their participation in the act of burning Serbian products.

In the meantime, Stojkaj, who first shared the video of them burning Serbian goods in Decani on Facebook, removed the video.