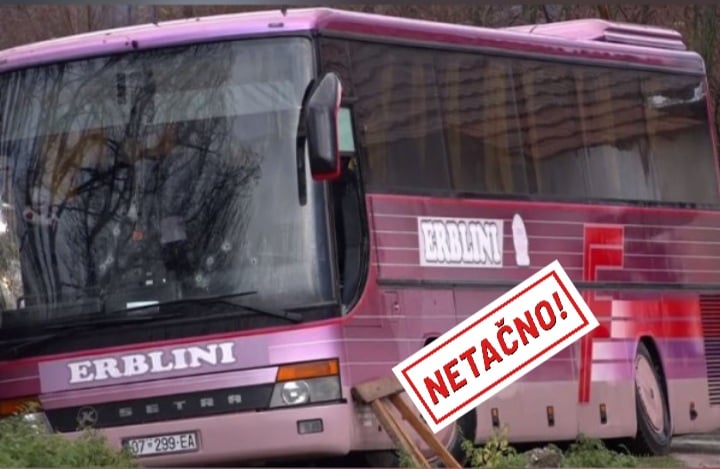 Publishing fake news, misinformation, spins, speculation, propaganda is a common practice when it comes to news about Kosovo and from Kosovo. For tabloids, news about tragedies remains particularly „enticing.“ It is the time when these media outlets are practically sprinting to publish unconfirmed information. One such tragedy took place less than a week ago near Glodjane when a still unknown person carrying a Kalashnikov opened fire on a bus transporting students from Djakovica to Decani, killing three (two students and a bus driver) and injuring one person. This news in itself is a ‘sensation’, meaning that the tabloids had ‘plenty of publishing material’.

The shooting in Glodjane captured the headlines in the region on September 26th and September 27th. Serbian tabloids and pro-governmental media reported about the tragedy extensively in a series of texts and special programs.

Several of the published texts were identical, with slight differences, primarily on whether the names of the victims were revealed in full or with initials, with blurred or uncensored photographs.

The texts, however, were much more moderate, while several media outlets cited Albanian media as sources (Koha, Reporteri, Klan Kosova, Ekonomia Online). Moreover, they even used initials for underage victims and blurred photographs so that their faces were not visible.

Although the Kosovo Police has yet to arrest any suspects or share any information about the possible motive, Kurir tabloid had information about the motive on the same evening the tragedy took place. The information on this motive did not arrive from official addresses, and the tabloid failed to provide evidence on the authenticity of these findings. Moreover, in its subsequent text, Kurir shared information of an altogether different motive.

„WHEN AN ALBANIAN MAKES A PLEDGE (besa): A bus with children near Decani SHOT AT OUT OF VENGEANCE?!“ These are the killed driver and students (PHOTO) – reads the headline of an article published by Kurir on November 27th, citing several sources. The content of the text, in contrast to this title, was much more moderate. Moreover, it did not reflect the headline, instead, it only dealt with previously available information, mostly from the Kosovo media.

The text: WE REVEAL WHAT CAUSED THE MASSACRE NEAR DECANE: A young man fired a Kalashnikov into a packed bus! KILLER ESCAPED! VIDEO, published three hours after the tragedy, states:

„As Kurir reveals, a tragedy occurred as a result of revenge. Namely, one of the passengers was kicked out by the bus driver and the conductor because he was harassing girls. He then took a Kalashnikov, waited for the bus, and fired a spray of bullets.“

Speculations on the number of victims and injured

In the meantime, the majority of tabloids reported that four people died in the shooting, which is incorrect information. Only a few of them have modified this information in the meantime. The incorrect news is still available on some portals.

Albanian-language media originally reported that four people were killed, however, they deleted the incorrect news in the meantime. Six days after the tragedy, the false news is still available on some portals – such as  Ekonomija Onlajn, Koha Jone, portal 27.al and others.

Also, several media reporting in Albanian speculated about the motive, which ranged from a possible quarrel between the transport companies to the shooter being thrown out of the bus because he allegedly harassed girls, to claims that it was a terrorist attack.

However, these news pieces were soon deleted from Kosovo portals.

Alo tabloid, in its text „DETAILS OF BLOODSHED IN KIM: Kalashnikov echoed. The age of the victims is known – the number of victims increased!“ wrote, citing several sources: „A bus was fired at from a Kalashnikov near Glodjane tonight, and according to the latest information, four people were killed, Ekonomia Online reports.“

Belgrade-based Novosti, in its text „A BOY AND A GIRL KILLED: New details of the shooting on the bus near Decani“ confirmed that three people were killed, highlighting the number „three“ in capital letters, only to then report about four victims: „Koha reports that the bus conductor is the fourth victim.“

Novosti also incorrectly reported that „two more people have been hospitalized and are in critical condition.“ According to confirmed information, which arrived the same evening, one person was injured, operated on, and was out of danger.

The same newspaper/portal has since modified its article, stating that the Pec emergency services and Prosecutor’s Office have confirmed that three people died, justifying its initial report by saying that Koha had previously reported about four victims, while an emphasis on another topic was given in the headline – on whether there were Serbs on the bus or not.

On the night the tragedy happened, several media outlets reported, without confirmation, that several students were also injured.

Connecting the tragedy to Serb victims and terrorism

In the meantime, some tabloids placed the news in a deeper context the very next day, November 27th – Glodjane as a terrorist hotbed from the ’99 wars, as a camp for abducted Serbs.

The text, „The base of the terrorist KLA, a camp for abducted Serbs: Village in KiM where a triple murder took place hides terrifying secrets„, states that a large number of illegal weapons remained in the hands of civilians in Glodjane.

Telegraf also reminded that the KLA headquarters headed by Ramush Haradinaj was located in Glodjane, as well as the camp for abducted Serbs and other non-Albanians and that Radonjic Lake is located nearby, where KLA members killed at least 34 Serbs and Albanians in 1998.

The portal Kosovo online published similar news: Bursts of fire on the bus shocked Kosovo: Glodjane was a KLA base, many weapons can be found in houses, the police were powerless.

In this text, along with the news of the tragedy, the same three arguments were used in the same order: A large number of illegal weapons, the headquarters of Ramush Haradinaj, and Lake Radonjic.

Following the confirmation of the Director of Kosovo Police, Samedin Mehmeti, that the police have three clues they are investigating, the text from this portal was picked up by Alo: AFTER THE ATTACK ON THE KOSOVO BUS Police is investigating three clues, warn of illegal weapons among citizens.

Novosti published a more detailed text with the reactions of officials about the tragedy – MONSTER WANTED, MASKED ALBANIAN: The reasons for the ambush on the bus transporting children near Glodjane in Metohija are unknown, in which it also reminded of Haradinaj’s headquarters, camp, and Radonjic Lake.

Six days after the tragedy in Glodjane, no additional details on what happened that night have been made public. Three people, a male and a female student, aged around 17-18, were killed, while the third victim was „Erblimi tours“ bus driver, Gani Gjokaj.

The police have two to three clues – „it was raining, so many clues have been washed away“.

Despite the mobilization of the investigative bodies and other Kosovo institutions, as well as the Kosovo public, no arrests have been made. The possible motive remains unknown, although speculations on the motive ran rampant – primarily in the Albanian media.

In the meantime, the killer was „given an ultimatum to surrender“, while €20,000 of prize money was offered for any information about the killer.

Even today, the media reporting in Albanian reminded that the competent authorities have not shared any findings with the public – although six days have passed since the tragedy while describing the case as a „mystery“.

How a (possibly stray) bullet turned into a bomb, a grenade, a projectile, an attack, and chaos