Mustafa is being transferred to the Detention Facilities of the Kosovo Specialist Chambers in The Hague and will appear before the pre-trial judge.

Further details will be provided in due course, reads a statement of the SPO. However, no details were revealed as to what charges were brought against him.

Salih Mustafa was the head of the KLA in the Lab operational zone during the Kosovo war. In mid-October last year, he was summoned for questioning by the SPO, however, at that time it was not revealed when and in what capacity he would be questioned.

As the Kosovo media previously wrote about Mustafa, he joined the „National Liberation Movement“ in 1988, which was led by Afrim Zhitia, Fahri Fazli, and Fadil Vata.

Serb authorities arrested him in 1993, sentencing him to five years in prison. After his release, Mustafa joined the KLA by organizing and deploying these units in the region of Pristina, Kosovska Kamenica, Obilic, Gnjilane, and Vitina.

After the war, Mustafa became the head of the intelligence service of the Kosovo Protection Corps and was an adviser to the then Kosovo Prime Minister and former KSF Minister, Agim Ceku.

For three weeks now, the media has been extensively reporting about the affair related to the alleged leak of thousands of documents from the Specialist Prosecutor’s Office in The Hague. These files were delivered to the headquarters of the „KLA War Veterans Association“ on three occasions. Moreover, some media outlets have also recently published these allegedly leaked files. The well-known Albanian TV station “Top Channel” started publishing documents  which it claimed were confidential and allegedly delivered to this media outlet from the Specialist Prosecutor’s Office.

The SPO did not react to this affair until this Tuesday, when they published a press release, praising the „ethical journalists“ who refused to publish these documents. At the same time, the SPO reiterated that they are committed to vigorously investigating and prosecuting individuals who commit any such crimes, “including the disclosure of the identity of individuals who may be called before the court or any information that could lead to their identification.”

There is still no confirmation as to whether the documents from this court were actually leaked – at a time when the first indictments are expected to be filed. 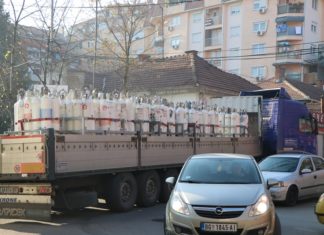