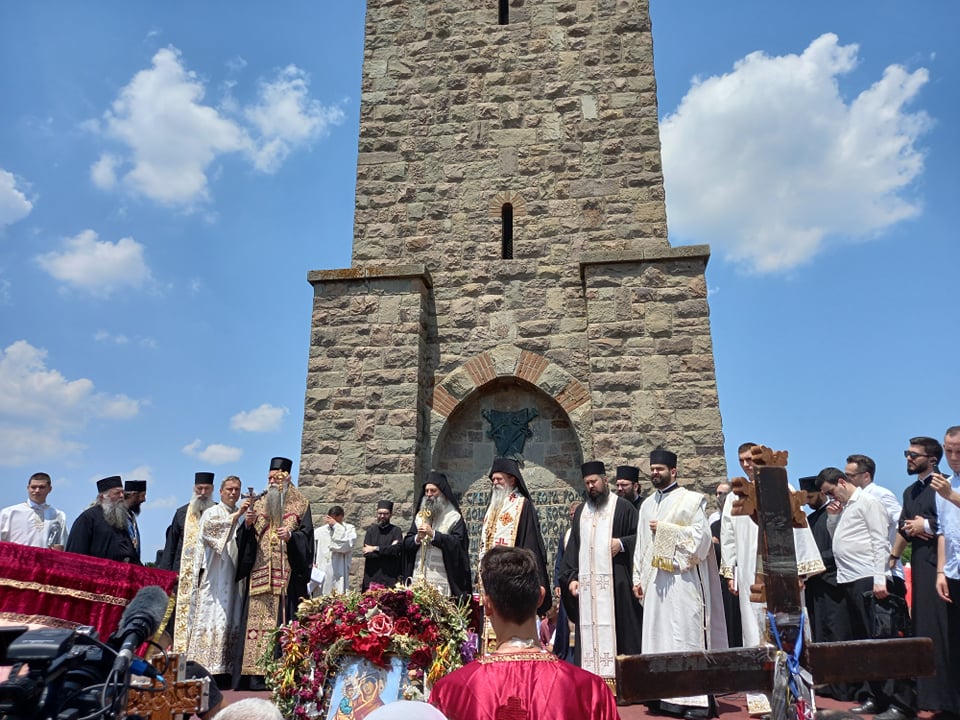 Serbs in Kosovo mark Vidovdan, the day when the Kosovo Battle took place 7 centuries ago.

As every year, this year the central liturgy was served in the monastery of Gracanica, followed by a service to the fallen soldiers in Gazimestan.

The Serbian Patriarch of Porfirije accompanied by the newly appointed Metropolitan of Montenegro, Joanikije, are staying in Kosovo for a two-day visit. The latter is, according to the rules of the Serbian Orthodox Church, also the guardian of the throne of Serbian patriarchs in the Patriarchate of Pec.

The director of the Kosovo Office, Petar Petkovic, is also on a two-day tour in Kosovo. He did not, however, attend the Gazimestan memorial service, but the lithurgy in Gracanica and later a ceremony in North Mitrovica to mark University Day.

Patriarch: Cultural heritage is a gift of God, diversity is a gift and it should unite

Monasteries and Kosovo are „our fatherland and our God’s gift“, and should not be a reason for conflict and separation – was the key message of the patriarch’s speech in Gracanica.

„The home of Orthodox Serbs is Kosovo and Metohija. A country where we were born for Christ and gained a lot that others either can’t or don’t want to understand,“ he said.

He confirmed that Gracanica and the shrines are a jewel of world cultural heritage, saying, however, that it would be „only an abstract heritage if it did not have its origin“. And it is of Serbian origin, added Porfirije.

He says that all people and nations received different gifts from God, and the Serbs, therefore, received this one. This does not mean, he says, that the gifts of diversity should be a cause for conflict, misunderstanding and separation.

„In fact, differences are gifts, and the very word gift means that it is something we received in order to multiply it and then redeem ourselves through it and give ourselves to others,“ he pointed out.

“Likewise, those others who are different, who create their heritage and also become part of the cultural, world heritage, through their gift, through the multiplication of what they have received from God, are revealed to us, we get to know them through it and through it – we accept“.

The patriarch also says that therefore the Serbian Orthodox Church views Albanians as its brothers.

„I am sure that we can not only understand each other, but also live together, grow and develop ourselves. Let us not be taught peace and community by those who sow discord among people and have only some to us unknown, distant material interests,“ said the patriarch.

About the „Kosovo oath“

At Gazimestan, he then said that the „Kosovo (Serbian) oath“ was not aimed to eliminate or erase anyone, but on the contrary: to establish gospel values ​​that can all be gathered in „two coordinates“ – „love for God with all one’s being and love for other people whoever they are as to loving oneself“.

„And if that is not the case, then it is a sign that we still need to grow in Christ,“ the patriarch emphasized.

„If we are authentic and true Serbs, we will not have a problem with anyone,“ said the patriarch, emphasizing that „God bless all other nations to be what they are, but also not to prevent us from being what we are“.

Joanikije said that even when Serbs say they are helping their people who are living in Kosovo and in Metohija, in fact:

„They help us because they are a blessing to us who come here.“

As per official police estimations, around two thousand visitors were in both Gracanica and Gazimestan, mostly from Serbia, Montenegro and BiH, along with Kosovo Serbs. Many came in an organized manner, and buses were escorted by Kosovo Police.

The visitors point out that they are coming to the most important venue in Serbian history, that it is important to preserve the identity and remember the true values ​​for which Prince Lazar and his soldiers sacrificed themselves.

Although last Vidovdan was marked in the midst of a pandemic, several visitors from Kosovo claim that there were more of them at the time, although fewer officials.

Historian and university professor from Belgrade, Milos Kovic, who is especially active in Serbia on the issue of preserving Kosovo as part of Serbia, comes to Gazimestan every year. However, he noted that there were more visitors this year.

Ković says that there is a renewal among young people in Serbia and pointed out that 90% of attendees at Gazimestan were young people.

„It means something“, he says.

„This means that our Kosovo oath is being awakened and renewed. To some, it seems like some „empty parapolitical“ idea, but it is obvious that this is ethically-oriented learning“, says Kovic.

As in previous years, the Kosovo Police secured today’s rally. Every visitor went through security clearance, and a minor incident was recorded when the Kosovo police, in an attempt to search a nun, arrested a young man from Podgorica who opposed it. The scene was filmed by a few media outlets, however, say he was arrested for singing „provocative songs“. Kosovo police have confirmed his arrest for „causing discord and intolerance“.

Police also stated that during the search at various locations in Gazimestan, they seized several knives and an iron boxer.

Petkovic in Mitrovica: Serbia is investing more than ever in Kosovo

During that time, the director of the Kosovo Office, Petar Petkovic, spoke in North Mitrovica.

He said Serbia currently is investing more in Kosovo than ever before, and that all this „requires years of peace and stability in the Western Balkans.“

„That is why dialogue is important. That is why it is important to talk to Albanians,“ Petkovic said, but also reminded of the problems, such is the case of the first return in Gjakovica/Gjakova.

Canak in Gazimestan and with Kurti

Petkovic was not the only Serbian politician in Kosovo today.

The leader of the League of Social Democrats of Vojvodina, Nenad Canak, was also with his son and nephew in Gazimestan to lay flowers at the Monument to the Heroes of Kosovo, but he also met with Albin Kurti in Pristina.

The Kosovo government said they had discussed the issue of missing persons and agreed that Serbia should open archives and provide information on mass graves.

Although they stated that he came with his son and nephew „in order to see the reality in which Serbs and Albanians live, because state policy, according to him, does not reflect the truth for the people in Serbia“, Kurti’s office did not report that Canak went to Gazimestan as well.

The news was confirmed by Canak and LSV themselves, who stated on the other hand that he talked with Kurti about the situation in the region and the possibility of connecting in the field of culture, multilingualism and general cooperation.

Canak is actually on a two-day tour to Kosovo. Yesterday, he visited Prizren, and then Pecka Patrijarsija.

„When something is a world cultural heritage, there are no divisions or nations or parties, only full respect. Respect to all those who guard and to all who have preserved, „the leader of LSV said on Twitter during his visit to the Patriarchate of Peja.

Canak also posted a message on this social network during his visit to Prizren yesterday.

Vucic to Kosovo Serbs: You will see who is faithful and who is the betrayer