Radio Kosovo, part of the Kosovo public service broadcaster, refused to broadcast a rerun and two premiere episode of an audio drama about Serb families of missing persons despite a previously reached agreement, Pristina-based NGO Integra announced this morning in its reaction against the censorship of ‘Radio Kosovo’. Radio Kosovo editor, on the other hand, stated that the content “offended the majority”.

NGO Integra and the Missing Persons Resource Centre carried out a project titled ‘Living with memories of the missing.’ According to an agreement with Radio Kosovo, the cycle of 10 audio dramas with the same title directed by Kushtrim Koliqi from Integra were supposed to be broadcast as per a previously agreed schedule.

“By mutual agreement, the premiere of the first episode aired on December 14th, 2020, being rerun the next day. The second episode aired on December 21st, 2020 and was based on the story of a Serbian woman from Strpce/Shtërpcë about her missing husband as a consequence of war. Realizing that this episode was dedicated to the story of a Serbian family, Radio Kosovo, arbitrarily, without warning, did not broadcast the rerun scheduled for December 22nd, 2020, at 20:10,” this NGO wrote in a statement.

Integra then called an urgent meeting with the management of Radio Kosovo, who, “angrily and nervously, said that they do not agree to broadcast content based on the stories of families of non-Albanian victims.”

“Taking into account that 3 audio dramas in the 10-episode cycle are based on the stories of Serbian families of missing persons, Radio Kosovo with a strict decision refuses the broadcast, forcing the other party (Integra) to terminate the cooperation automatically.”

The NGO revealed that the decision to censor audio dramas based on the stories of families of the wartime missing shocked and concerned them. Integra further interpreted this as a proof that “the ethnocentric public discourse in Kosovo continues to be nurtured and maintained, where a one-directional and politicized narrative dominates.”

“With such a decision, Radio Kosovo as a public institution, financed by the taxes of the citizens of the Republic of Kosovo, violates the basic rights of representatives of the civilian victims of war, denying them the right to express, the right to know and the right of participating in building the collective memory.”

With such an approach, Radio Kosovo also violates freedom of expression while also taking an unethical and painful position towards the families of missing persons, who, despite differences, have gathered the strengths to cooperate and articulate their concerns and demands through the Missing Persons Resource Center, Integra added.

They called on public institutions, the political spectrum, media, and human rights activists to urgently react to the censorship of Radio Kosovo, as “such an approach of a public broadcaster precludes a sound process of dealing with the past in Kosovo, denies the right of victims and their families to justice and endangers the basic principles of democracy.”

By the end of the war in Kosovo, 6,063 persons were reported as forcefully disappeared, while the current number of missing persons – different ages, genders, and ethnicities – is 1,638.

Intergra recalled that although over 70% of cases of missing persons reported since the end of the armed conflict were identified and bodily remains were handed over to families for (re)burial, perpetrators of criminal offenses are still at large, while there is relatively little knowledge about the circumstances of the disappearance.

Driven by this, in 2019, Integra, the forumZFD program in Kosovo and the Missing Persons Resource Centre published ‘Living with memories of the missing’, a memory book unfolding stories of 10 families with around 33 members missing from the last war in Kosovo, which the abovementioned audio dramas were based on. These audio dramas aim to raise collective awareness and public recognition of sufferings that the families of missing persons have been facing for more than 20 years.

KoSSev sent a request for comment to the director of Radio Kosovo, Ernest Lumi, citing Integra’s allegations, but no response had arrived by the time the news was published.

Radio Kosovo: The language offended the majority of people, it is not proper for the current situation in Kosovo

Pristina-based Koha, however, recently received a comment from the editor of Radio Kosovo, Mirveta Uka.

According to Uka, the editorial board of Radio Kosovo was polite and they made air time available on the radio although they were not obliged to do so.

She admitted that the problems appeared in the second episode.

„They wanted air time and we were very understanding. The language used in the drama is not adequate for the current situation in Kosovo, which is sensitive. Therefore, it was not adequate because that language offended the majority of people. We have thousands of Albanian victims and we cannot allow the use of the speeches and lynchings that have been used,“ she told Koha.

Uka added that she has sympathy for every family of the missing, regardless of their ethnicity.

„We express our condolences to everyone. But we cannot allow such sermons to be heard by the Albanian majority when we still have empty graves,“ she said, Koha reports. 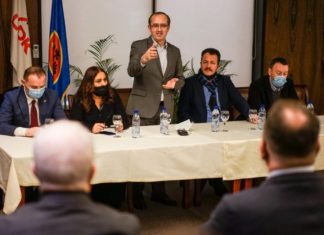