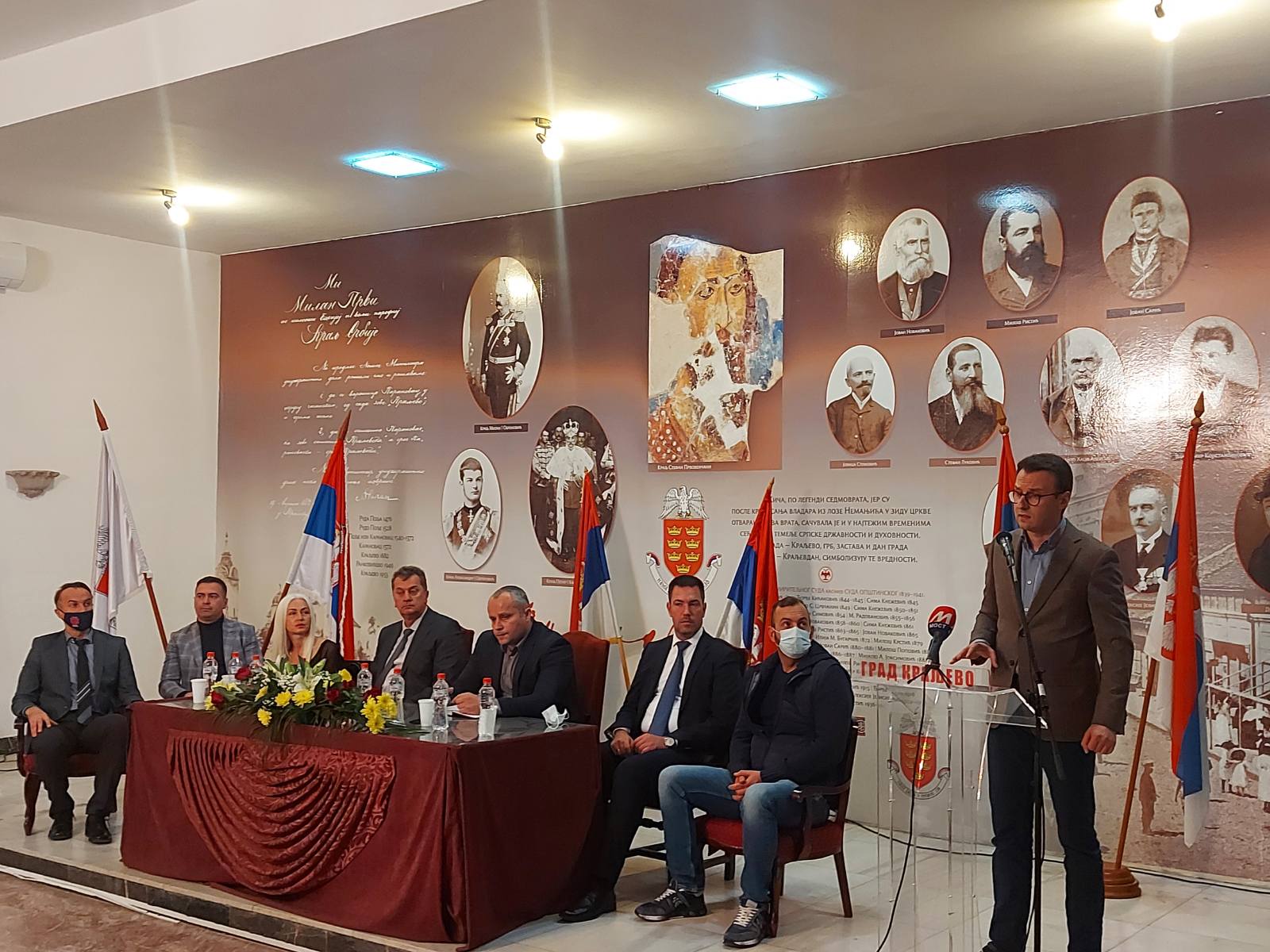 Petkovic on Wednesday: „This is the policy of psychopath Albin Kurti. Freedom of movement of our people is being abolished. They are using long-barreled weapons against the bare-handed people, dozens were wounded. It was an attempt to kill our people. With the wounding of Srecko Sofronijevic, the first drop of Serb blood has been spilled in Kosovo. Doctors are fighting for his life, and the bare-handed Serb people managed to defend the northern part of Kosovska Mitrovica and push back members of ROSU. Albin Kurti’s savagery has led to chaos in the north. “ Petkovic on Thursday: „I came to invite you to vote at the elections that will be held on Sunday in Kosovo, to preserve our ten municipalities in Kosovo, so that Albanians would not lead Serb municipalities, or those Serbs who work for them, because they are the destroyers of Serb unity.“

In less than two days, the head of the Kosovo Office within the Serbian government shared two strong patriotic messages.

At an extraordinary press conference held in Belgrade on Wednesday, Petar Petkovic told the public in Serbia about “the crackdown by the Albanian police – Kurti’s psychopaths and lunatics” against the Serbian people.

A day later, Petkovic visited Kragujevac, where he spoke to internally displaced people from Kosovo. He urged them to go to the polls organized by Kosovan institutions on Sunday, October 17th. Not only that, but Petkovic also called on them to cast their vote to Srpska Lista, thus making sure that all 10 communities – which are “a pledge” for the formation of the Association of Serb-majority Municipalities – fall in the hands of true Serbian representatives.

„Dear brothers and sisters, I came to visit you today, you who were forced to abandon your homes, your Kosovo due to various perils. Trust me when I say that this will not be the last time we see and talk to each other, but it is our pledge for future encounters. I came to invite you to vote at the elections that will be held on Sunday in Kosovo, to preserve our ten municipalities in Kosovo, so that Albanians would not lead Serb municipalities, or those Serbs who work for them, because they are the destroyers of Serb unity. SL candidates must win because only SL has the full support of the Government of Serbia, President Vucic. It represents the umbilical cord between our people in Kosovo and our people in central Serbia. SL is the only guarantor that the investment cycle in Kosovo will continue, to build new kindergartens and hospitals, new roads and schools,“ Petkovic pointed out.

He also revealed that the state will try to provide additional financial assistance to Kosovo Serbs in the coming period:

“So that our people remain at their hearths and that our youth are not forced to leave Kosovo.”

Petkovic once again mentioned the Prime Minister of Kosovo, Albin Kurti. This time, however, he did not use the offensive words from the day before.

„At a time when the authorities in Pristina, led by Albin Kurti, are pouncing on Serb communities, we should provide a message of unity and not give a shred of what belongs to us. We should fight to enter all those institutions that belong to us and to defend our existence and our survival through the institutions,“ concluded Petkovic.

During the pre-election campaign for local elections in Kosovo, in less than a month, two major crises occurred in the north. For the Serbs, both crises were caused by the deployment of special police units from the south.

During Wednesday’s police action that Pristina described as an anti-smuggling operation, as well as during the 13-day-long blockade of highways near Jarinje and Brnjak, the Kosovo government, and especially Albin Kurti, was harshly criticized by the Serbian side.

While visiting the IDPs in Smederevo earlier this week, Petkovic confirmed that three years after Oliver Ivanovic, and once upon a time Dragisa Milovic, who is now the candidate for mayor in front of Srpska Lista, destroyers of Serb unity still exist.

The invitation for displaced Serbs to go vote at the upcoming Kosovo elections was previously sent by the Serbian Commissariat for Refugees and Migration. The President of Serbia also called on Serbs from Kosovo to go to the polls. A promotional video was also recorded in which the state itself called on the displaced to vote in the elections, although, as it was emphasized in the video, it was done at the request of the displaced themselves.