In the newest wave of rising interethnic tensions via political statements and media reports on alleged interethnic incidents, the latest news arrived from Prizren: „Fans in front of Our Lady of Ljevis responded to Serbs by shouting Kosovo is the heart of Albania.“ Nobody shouted any political slogans, it was a case of false reporting and the police are aware of it, sources from the parish said for KoSSev. „A Montenegrin couple got married yesterday, they displayed an old Montenegrin flag to take a photo after the wedding, with the permission of the police officer on duty,“ they stated.

A photo, which shows a group of young people posing in front of Our Lady of Ljevis, including a young man wearing a Montenegrin costume, as well as a Montenegrin flag, went viral yesterday, and was widely shared by the Kosovo media.

„Serbs in Prizren shouted Kosovo is Serbia at a religious ceremony“ – said the headline published yesterday by the Prizren Press, Klan Kosova and several other media outlets reads. Furthermore, some media alleged in their headlines that it was a provocation, with the text stating that „these nationalist cries alarmed the inhabitants of Prizren who live nearby.“

The Council for Protecting Human Rights and Freedoms, known to the general public by its leader Halit Berani, also reacted, alleging that „celebrations and nationalist songs disturb the citizens of Prizren.“

„Abuse of religious ceremonies and provocations with nationalist songs of Serbs who come to family celebrations and use the Serbian flag is a criminal offense and does not contribute to interethnic relations and building a future for all communities. Prizren is known as a city of culture and tolerance for multinational diversity and is an example of an ancient city. However, the Council for Protecting Human Rights and Freedoms condemns such acts and scandals and demands that those responsible be brought to justice,“ reads part their reaction shared by the Kosovo media.

Today, some Pristina media wrote about the reaction to this news. A group of „Arpagjik“ fans from Prizren chanted „Kosovo is the heart of Albania“ in front of the church and shared this video on social networks with a message saying that it comes as a reaction to yesterday’s „provocation“. Several Orthodox believers were praying in the church during the chanting.

KoSSev obtained several testimonies from the church community in Prizren, according to which yesterday’s event was not a provocation but a wedding at which, as several sources who spoke on condition of anonymity testified, no political slogans were shouted.

The wedding of a Montenegrin couple took place yesterday at around 4pm in the church of Our Lady of Ljevis. The groom was wearing a Montenegrin costume. After taking photos in the church, the couple went outside, and the local priest, knowing about the custom of displaying the flag, allegedly warned them to leave the flag in the backpack – which they agreed to do.

However, our source revealed that the bride and groom did display the flag, after allegedly asking a police officer in front of the church if they could do so in order to take a photo. 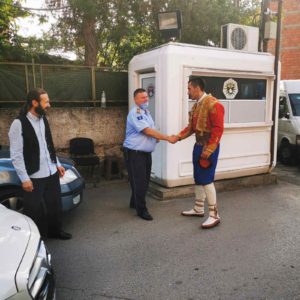 „The Kosovo police officer agreed, telling them that he understood that the moment is special for them, and even stopping the traffic for a moment,“ KoSSev’s source emphasized.

The church community suspects that this was the moment when the person who runs a private craft shop in the immediate vicinity of the church allegedly took photos and shared them, and then ended up in the Kosovo media, who presented „incorrect accusations that the wedding party shouted Kosovo is the heart of Serbia“. According to our sources, this person is known for allegedly provoking guests who visit this church and showing signs of religious and national intolerance.

„A group of 20 people, who resembled Albanian fans, gathered in front of the church today, chanting in Albanian – Kosovo is the heart of Albania, and spat at the church,“ another source told KoSSev.

The church community of Prizren pointed out that the policemen in Prizren behaved properly the entire time, such as the police officer in the field when asked by the newlyweds to take a photo with the flag on display, as did the commander „who is aware of what happened“ and who allegeldy wrote and forwarded a report to Pristina.

According to their testimony, the public prosecutor was also informed about the „false reporting and testimony, as well as the spread of religious and ethnic intolerance.“

In a video published in the Kosovo media, initially posted on a Facebook page of the fan group „Arpigjik“ from Prizren, the group is seen holding a spread scarf in the colors of the Albanian national flag and shouting „Kosovo is the heart of Albania“. The end of the video also shows the Orthodox believers praying inside the church while the fans were chanting.

Prior to the news been published, KoSSev was unable to get in touch with Kosovo police spokespersons.

Only a few dozen Serbs currently live in the city of Prizren. This small community developed due to the Prizren seminary. Approximately a dozen Prizren-born Serbs, mostly older generations, spend the summer in their city, returning to central Serbia at the beginning of autumn. The rest of the 70 Serbs currently living there include students, professors, priests and their families. Before the war, about 12,000 Serbs lived in the city.

Our Lady of Ljevis was severely damaged during the March riots i  2004. The church is slowly being rebuilt and is now under the protection of UNESCO.