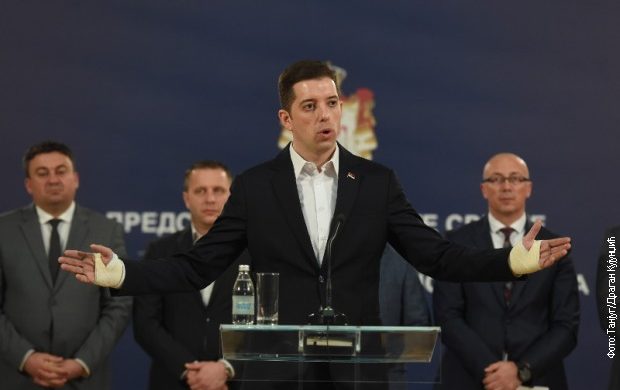 The visit to North Kosovo will follow after less than two weeks since the arrest in Kosovska Mitrovica of the Serbian Government’s top official in charge of Kosovo issues. A ROSU unit arrested him, in front of the top Kosovo Serb officials in the Kosovo Government and Parliament, managers of institutions, as well as the Serbian President Secretary General, Nikola Selaković, while giving opening remarks at a roundtable organized at the Mitrovica Palace under the Serbian President’s initiative for internal dialogue on Kosovo. He was then escorted by ROSU with his head bowed and handcuffs on his wrists through Pristina downtown to a police station, before the eyes of the gathered who were filming, applauding and shouting, only to escort him afterwards to the Merdare crossing. It was announced then that he had not been allowed access due to an “inflammatory speech” and that he had been warned that he would be arrested in the case he decided to get in nonetheless.

"Regardless of who the official is, he has, like any other pilgrim, every right to pray in any church he wants to. Rules are to be obeyed, since the new reality in Kosovo is very well known and this reality has been recognized by each Serbian state official”, says the Deputy Foreign Minister Rejhan Vuniqi for Kosovapress, thus confirming that “the request has been granted in the spirit of peace and understanding due to the holiday”.

"We are not asking for any sort of permission, we inform them. That is the deal”, stated earlier Serbian President, when welcoming Djurić in Belgrade after his arrest on March 26.