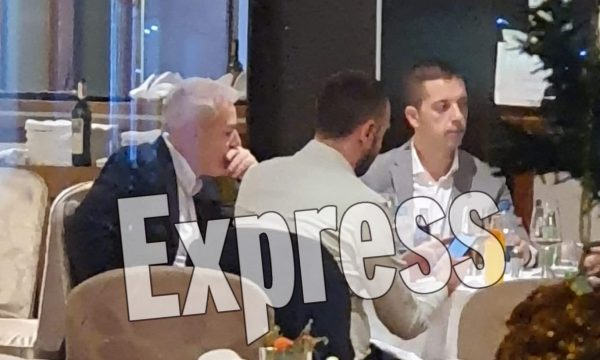 Vice-President of the main board of the Serbian Progressive Party and the Head of the Kosovo Office, Marko Djuric will be attending a roundtable on regional co-operation in Tirana from the 7th to 9th December, the Kosovo Office confirmed for KoSSev last night. The confirmation arrived after photos were released last night of an alleged meeting between Djuric and senior officials and deputies of the Self-Determination, LDK and AAK parties in Tirana, at a restaurant called „floor 15“.

„During his stay in Tirana, in the margins of the conference, Djuric will hold numerous meetings with representatives of political parties from Bosnia and Herzegovina, Northern Macedonia, Montenegro, Albania and Kosovo, participants of this regional gathering, including representatives of the ruling and opposition parties from the Republic of Serbia,“ the Kosovo Office said in a written reply to KoSSev, after the news of the meeting was published by the Kosovo media last night.

This is the second roundtable – organized by the Council for Inclusive Governance in cooperation with the Ministry of Foreign Affairs of the Federal Republic of Germany – dedicated to improving regional cooperation, coordination of internal political and economic reforms, and assistance in resolving regional disputes – the Office explained, adding that the first gathering was held in Skopje between 18th and 20th October.

The unofficial answer to why the meeting was not announced earlier reads that the Serbian Progressive Party has already done so today. Our portal is not on the party’s email list. Also, we were unable to find an announcement on the official site prior to the time the news was published.

We have not yet received an answer to the question – what are the topics and the eventual outcomes of this roundtable?

According to Pristina-based Gazeta Express, the photographs published last night show Djuric sitting at the table with a member of the Presidency of the Self-Determination Movement – Xhelal Svecla, a member of the Democratic Alliance of Kosovo, Arban Abrashi and a Vice-President of the Alliance for the Future of Kosovo and the mayor of Djakovica, Ardian Gini.

KoSSev also wrote to Svecla last night, requesting confirmation that the meeting took place. We also raised the following questions: why the meeting had not been previously announced, and what was the nature and topic of the meeting, as well as its outcome. By the time the news was published, no response had arrived. Later yesterday evening, Svecla confirmed the CIG’s events to Pristina based media, after they had also no previous response to their attempts to get in touch with him.

In a press release published today, CIG confirmed that Djuric and Svecla, among others, met yesterday at a roundtable in Tirana as part of their project.

Earlier in the day, Marko Djuric held a press conference in Belgrade, where he commented on Albin Kurti’s alleged statement that he „does not want to negotiate with Vucic“, saying that Kurti „cannot make personnel decisions on behalf of Serbia“.

He reiterated that Kosovo officials do not look to the future, but they show that they are facing the past through their statements. Djuric also claimed that they have clearly shown that they are against the dialogue.

The Head of the Kosovo Office also spoke of the „desire“ of Serb employees in the Kosovo judiciary to leave those institutions because of the first-instance verdict of Ivan Todosijevic, rece two-year prison sentence for inciting racial, religious and ethnic hatred.

Six years since Janicijevic’s murder: Another murder of a mayoral candidate...