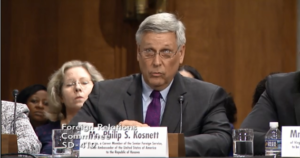 I would say that US position has not changed. We think it’s critical that both countries (Serbia and Kosovo) be able to discuss new ideas, but that is not a code word for land swap or any specific course of action – the new US Ambassador to Pristina Philip Kosnett said in front of the US Senate Committee on Foreign Relations when asked about the exchange of territories.

Murphy also asked Kosnett whether the State Department received the report about this meeting between Kushner and Dacic, to which Kosnett replied that this is the first he had heard about this particular meeting.

You can read what Kosnett said in his address HERE

Senator Chris Murphy posed the question on the exchange of territories, recalling the latest visit by Serbian Foreign Minister Ivica Dacic to the US, when he met with US officials. Murphy said that after the meeting with Jared Kushner, Dacic said that „the US position is now more tuned to our position,“ which “set off some wild speculations in the region as to what the change in the US position is“.

“The worry amongst many is that the US is now much more amenable to something called land swaps. This is something that has been off-limits in the past,” Senator Murphy said.

“What instructions do you have going to Kosovo with respect to the US position on land swaps and has it changed given these comments from Dacic?” Murphy asked Kosnett.

“I would say that our position has not changed. The position of the administration is that we support the EU facilitated dialogue between Pristina and Belgrade. We think it is important that both governments and other stakeholders in these countries move forward with creative thinking about ways to overcome the longstanding tensions between Kosovo and Serbia. We think it’s critical that both countries be able to discuss new ideas, but that is not a code word for land swap or any specific course of action. We very much want to see what sort of ideas the two governments come up within the context of the dialogue,” Kosnett said.

“Our overall strategic goal is to see stability in the region, a resolution of the longstanding tensions, disagreements between Serbia and Kosovo, in a manner that will facilitate both countries’ stronger ties with the West,” he added.

The statement comes in the wake of the political and media avalanche of headlines and statements on „partition“, „delimitation“, „exchange of territory“ and „border correction“ between Serbs and Albanians (in Kosovo). Earlier, German Chancellor Angela Merkel announced that the borders in the Balkans are untouchable.