If Hashim Thaci is an Albanian Tarzan, then who does Aleksandar Vucic represent? He who has been leading the dialogue with him for more than seven years? If this is true, doesn’t it also say a lot about him and the mediators, as it speaks for the people who came out of “the woods.”

Although I am not burdened by the past, the latest nonsense by our political leaders has led me to make a comparison between former Serbian officials, the official Serbian policy, and the attitude of the Albanians towards Kosovo Serbs and the politics enforced on them. It seems paradoxical, but the fact remains that the former Serbian consul in Kosovo, Milan Rakic, had more understanding for the Albanian-Serbian reconciliation in the last century when compared to the later generations, including ours!

Namely, in two dispatches (sent on June 16 and July 4, 1907), Rakic wrote with great sympathy about the Albanian-Serbian agreements which, in the traditional form of the Besa (word of honor), proclaimed guarantees of personal, property and legal security in the Gnjilane region.

These dispatches conveyed concern and respect for Albanians and Serbs who are trying to resolve mutual disputes in a dignified way…! While we spent a century in mutual conflicts, misunderstandings and insults, instead of looking for a modern, rational political alternative for Besa and Rakic in these new circumstances!

How can we explain the fact that our leaders, after seven years of joint picture-taking and advertising, mainly in Brussels, revealed in the eighth year that the anachronistic negotiators of Serbia have negotiated with people „from the woods“?! If this is true, doesn’t it say a lot about them and the mediators, not only the people who came out of “the woods.”

Therefore, my dear friend, there is no dilemma. The history of our relations is overcome by conflicts and hatred, but there are also some positive persons and events.

Tucovic, Novakovic, Rakic… grew tired of national hatred, while new generations are prone to a deja vu! Unfortunately, many easily conformed to hatred, while only a few of them to the former Serbian consul! A historical paradox that is unfortunately nurtured as an expression of „national tradition.“ In the past century, we had wiser political figures than those we have now. Does that mean that we should prepare to live according to the rules of the jungle where only the strongest will survive?! If so, will we soon have a fight between Hashim Thaci and Aleksandar Vucic to determine who will be the king of the jungle?!

Let me be perfectly clear. The north of Kosovo has been an oasis of crime and corruption for years. But the source of that crime is in Pristina and Belgrade. The chain of crime is controlled by Hashim Thaci and Aleksandar Vucic. Therefore, the intervention of the Kosovo Police was seemingly aimed at eliminating crime and corruption, but the essence of the intervention was to speed up and increase the feeling of fear that unless the north is divided it would soon become a jungle under the rule of Hashim Thaci before the next meeting in Paris. That is why the intervention was initiated to fight against crime, while the true aim of the police intervention was to instill fear among the citizens of Kosovo that Kosovo’s Tarzan, Hashim Thaci, will soon rule over the north!

Besides, I can’t tell for sure – are there differences between hatred, crime and politics in our relations?! That is why the decision to intervene in the north of Kosovo is actually a symbiosis of the interests of crime and politics in order to raise fear of the next steps that would convince the local people that the only partition could „save“ them from political representation by Albanians who, as former members of the KLA, came out of the “woods.” For this reason, I believe that the latest statements by the President of Kosovo on the „unification of Kosovo and Albania“ and against the Association of Serb-majority Municipalities, against the taxes, and the Serbian Prime Minister’s statements on „people from the woods“ have the same goal – the partition of Kosovo at all costs!

Therefore, speaking about Pristina’s announcements of unification with Albania, Aleksandar Vucic said he is absolutely convinced that things would proceed in the direction announced by Kosovo President Hashim Thaci, when he spoke about a possible referendum on the unification of Kosovo and Albania – if the European Union continues with the isolation of Pristina. Therefore, Serbia will have to respond to it! „I am absolutely convinced that things will move in that direction. We will absolutely respond to this in a serious and responsible, but a severe and determined way.“ So, the President of Serbia is announcing a duel…

If Hashim Thaci is an Albanian Tarzan, then who does Aleksandar Vucic represent? He who has been leading the dialogue with him for more than seven years? If this is true, doesn’t it also say a lot about him and the mediators, as it speaks for the people who came out of “the woods.” 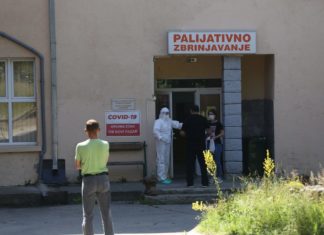