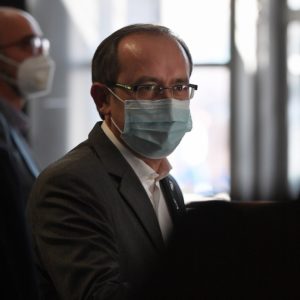 The Prime Minister of Kosovo, Avdullah Hoti spoke with the European Commissioner for Enlargement, Oliver Varhelyi today, to whom he expressed his concern over the alleged illegal entry of the COVID-19 vaccine into Kosovo.

„We expressed concern about the illegal entry of the COVID-19 vaccine into Kosovo, without regular import procedures or drug donations, the origin of which is unknown. We believe that this behavior of the Republic of Serbia is unacceptable and the Kosovo institutions have initiated the necessary legal proceedings against the persons involved in those actions,“ Hoti told the European Commissioner, according to Hoti’s Facebook post.

The Basic Prosecutor’s Office in Mitrovica confirmed this morning that an order had been issued to collect information regarding the case of distribution of vaccines from Serbia, but that an investigation has not been initiated so far. However, they believe that an investigation will follow, the results of which may possibly reveal two criminal acts – smuggling and illegal performing of medical activities.

At the press conference held today, Serbian President Aleksandar Vucic also alleged that Pristina planned to confiscate drugs and vaccines in Leposavic this morning, adding that this was the reason why the vaccines were moved to another location during the night.

Although the COVID-19 vaccine has not yet arrived in Kosovo, Hoti assured Varhelyi that all citizens of Kosovo are included in the vaccination plans.