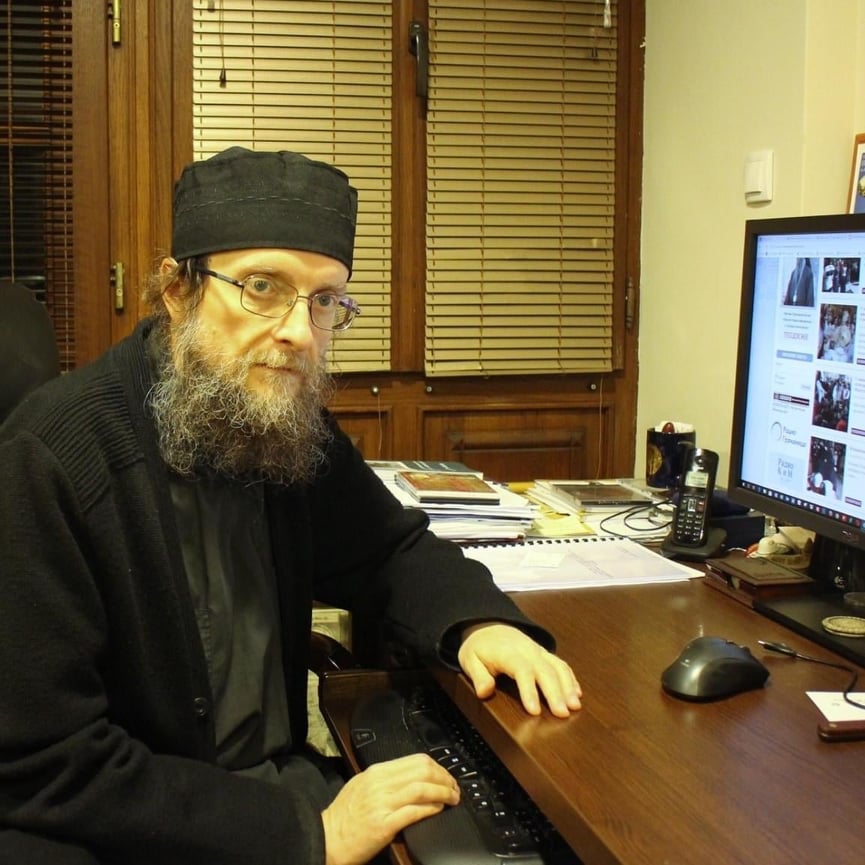 „All peoples in Kosovo have a collective awareness of the preservation of cultural heritage and monuments, while politics is trying to divide that heritage by nationality – into Serbian and Albanian,“ reads the message of the debate „Kosovo – Heritage of Memory“ organized as part of the festival “Mirëdita – Dobar dan” held in Belgrade. An attempt is being made to revise history, while one’s own laws are not respected at the same time, Fr. Sava Janjic said. And while being in favour of bringing Serbs and Albanians closer through culture and dialogue, he critised the manner of introducing the topic „Kosovo heritage“ during the festival. Such an event does not serve reconciliation, but actually creates even deeper divisions, he views.

Durim Abdullahu from the Faculty of Philosophy in Pristina and Korab Krasniqi from the Forum ZFD, spoke yesterday evening at the Mirëdita – Dobar dan public discussion titled „Kosovo – Heritage of Memory.”

According to the organizer of the festival – the Youth Initiative for Human Rights, in one of the conclusions of the discussion, politicians were accused of causing the dividing line. Contrary to it, the speakers view that Kosovans “love and preserve cultural heritage.“

„Politicians have no feelings about heritage and cultural heritage in Kosovo. It is an area where Serbs and Albanians lived, and the same peoples still go and visit those sites. That is why it should be a common heritage and everyone should have access to it,“ Abdullahu said during the public discussion.

Korab Krasniqi, on the other hand, said that „saying that some sites are only Serbian or only Albanian would not present a problem” for him.

„But that should be the starting point for conversation and discussion about cultural heritage,“ he added. „People need to do research on that topic, not just talk about politics and divisions.“

Abdullahu said that for instance citizens who live near the monastery of VIsoki Decani understand the problem to which the monastery is faced and reminded that during the Ottoman period, Albanians actually guarded these sites.“

Although the public in both Serbia and Kosovo are solely informed about the protests and insults of Serbian right-wing activists and spokespersons in front of the Center for Cultural Decontamination, which houses Kosovo’s cultural installations – instead of hearing about the culture of Kosovo Albanians – the festival organizers have studiously organized the festival in the Serbian capital ever since 2014.

New initiatives are joining them now, thus, the Belgrade based PG Mreza media production team visited Pristina last year and reported about its culture scene in two TV reports, Now, and it will be presented tomorrow on TV N1 in its re-edited version show called „From Pristina with Love“.

A significant part of the Serb public, however, still greets the news of the festival „Mirëdita – Dobar dan“ with controversial interpretations and condemnations. Instead of being a unique cultural experience, the events held within the festival are seen as politically biased and one-sided. Moreover, some have alleged that the topic of culture is being abused in order to impose political ideas and propaganda. Apart from the criticism of the cultural installation content and the absence of the Serbian cultural scene from Kosovo, one of the objections is that no similar festivals of Serbian culture are being organized in Pristina.

Indeed, no similar initiative has been recorded in Pristina. Marigona Shabiu from the Kosovo Youth Initiative said during her guest appearance in the “Pravi ugao” talk-show with Ljubica Gojgic earlier this week, explained that some very good opportunities to present Serbian art to Pristina this year were prevented by the coronavirus pandemic.

Fr. Sava: Attempts to deny the SOC heritage as Serbian and declare it as Kosovan are a direct consequence of the strategy to Albanianize the entire heritage

The abbot of Visoki Decani, Sava Janjic, also reacted to discussions on „Kosovo’s cultural heritage“ held within this festival, as well as the series of reactions the event provoked.

In six points, the Abbot listed the basic principles on the basis of which the SOC delegation participated in the Ahtisaari dialogue in 2008, which then resulted in some of the existing Kosovo laws. The laws which, however, Kosovo does not respect, he pointed out. He also shared what he believes were some of the oversights of the festival organizers.

„With this comment, I do not intend to discourage cultural cooperation between Kosovo Albanians and Serbs. It is important and necessary, but I would like to emphasize that in addition to pretty declarations in Belgrade, it is crucial to show respect to Serb culture and Serb heritage in Kosovo. Practically no Kosovo Albanian organization has distanced itself from the systematic discrimination of the heritage of the SOC and the Serb people, which has been carried out for years in front of everyone in Kosovo, particularly through some media reporting in Albanian. The international institutions and the ambassadors of the Quint countries are the only ones who officially react.

Father Sava pointed out that the Kosovo laws define a special attitude towards the sites that are SOC property in Kosovo, adding that „there are numerous attempts to change that and revise the centuries-old history.“

While recalling the fact that Serbian Orthodox sacral buildings and monasteries were targeted even after the war, while many still lie in ruins as well, the Abbot underlined that stronger measures of institutional protection and physical security of SOC shrines are needed.

„Of course, all cultural and especially religious buildings in Kosovo, Serbian, Albanian, Ottoman (Turkish), etc. are primarily important for the communities that use them and to which they belong, but they are also important for all citizens of Kosovo, regardless of origin. Those UNESCO-listed buildings (currently there are four religious buildings of the SOC on the UNESCO list) are also part of the world cultural heritage. These facts do not exclude each other,“ reads the second principle highlighted by Father Sava.

Attempts to deny the SOC heritage as Serbian and declare it Kosovan are a direct consequence of the strategy of “Albanizing the entire heritage in Kosovo, which is contrary to Ahtisaari’s principles, EU and US standards, which respect cultural and religious uniqueness of different ethnic communities in their territories,” Sava Janjic pointed out in the third principle.

The connection of cultural and religious buildings of different communities in democratic secular countries and their ownership over these properties must not be brought into question.

„Broaching this topic in the way it has been done at the Mirëdita festival in Belgrade substantially damages interethnic and interfaith relations in Kosovo and, unfortunately, does not contribute to reconciliation because Kosovo Serbs and representatives of the Serbian Orthodox Church, which has valuable heritage in this area, are excluded from dialogue, as if only Albanians live in Kosovo, while Serbs only live in central Serbia,“ stressed Fr. Sava.

Although the politicization of heritage is being publicly criticized at this festival, according to the Abbot, the promotion of the idea of ​​“Kosovo heritage“ creates an even greater division and promotes a new political concept of heritage, which: „Essentially relativizes its identity and history, which has been extensively documented in historical and archival material from the Middle Ages onwards.“

We can only talk about the „heritage in Kosovo“, because there are Serbian, Albanian, Ottoman (Turkish) heritages and others, as well as the traditions of different communities living in Kosovo, the Abbot explained.

All of them should be respected by all citizens and the entire society as something that is a general cultural heritage.

„That is why the road ahead should be pursued in the peaceful coexistence of different spiritual and cultural traditions, preservation of their heritage, tolerance of diversity, respect for laws and court decisions, and this is exactly what is not talked about, especially in Kosovo, where daily discrimination on ethnic grounds, contrary to laws that formally guarantee the equality of cultures, languages, alphabets and other national characteristics is being tolerated,“ he said.

Speaking about the fact that the church often receives responses which contain accusations that the government and the state system are secular, Father Sava states:

„In no modern democracies does secular civil society deny the cultural, religious and historical uniqueness of different communities. It is under the guise of undemocratic ‘secularism’ during communism that the identity and religious freedoms of entire nations and communities were denied.”

He cited the radical example of Albania from the time of Enver Hoxha, „where all religious buildings were closed or turned into museums and the entire heritage was expropriated into the state heritage of Albania. The return to such models is undemocratic and un-European.“

The SOC will continue to point out that additional elements of institutional protection are needed for the long-term preservation of Serbian heritage, especially SOC shrines in Kosovo, because Kosovo institutions themselves are „increasingly threatening“ them by ignoring laws and court decisions, Father Sava Janjic warned.

„After twenty post-war years of destruction of SOC shrines and continuous discriminatory treatment, which was not stopped by the laws arising from Ahtisaari’s plan, new, special models of protection with international guarantees needed – this should protect the heritage from future abuses of local institutions and powerful people.“

He reiterated once again that the issue of Serbian Orthodox heritage in Kosovo should be officially opened within the Brussels dialogue, regardless of the political course of negotiations, underlining that would have to include SOC representatives, especially the ones from Kosovo.

„Cultural and spiritual heritage, regardless of its diversity, and if all citizens treat it with tolerance and respect, does not divide people, but connects them by respecting their uniqueness”

“Serbian Orthodox religious buildings have been and will remain open to all people of goodwill – as it has been the case for centuries, but we hope that others in Kosovo will respect our identity and tradition,” he pointed out.

It is important to bear in mind that the democratic quality of any society is measured through the level of respect for different communities, cultural and religious traditions. This is an important legacy of the development of modern democracy in the world, concluded the Abbot of Visoki Decani.

Today was the last day of the „Mirëdita, dobar dan“ festival. The organisers – the Youth Initiative for Human Rights, Civic Initiatives from Belgrade and Integra from Pristina emphasized that the goal of the festival is to „initiate changes and create a tradition of cooperation, which will contribute to the permanent normalization of relations between Belgrade and Pristina“ and to do so through meetings between Serb and Kosovan cultural communities.

Ministry of Communities and Returns: Returnee from Drenovac attacked in his...