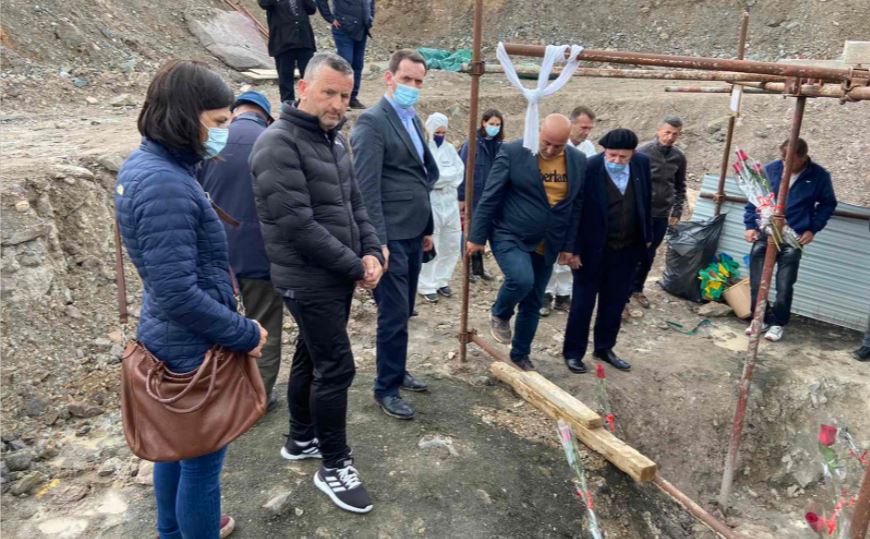 The exhumation process in Kizevak near Raska has been completed, the Kosovo government confirmed today. Out of 9 sets of remains found, two have been identified. The remains belong to ethnic Albanians killed in Rezala on April 5th, 1999. The completion of the excavations at this location was supervised by the heads of the Pristina and Belgrade commissions for missing persons, Ibrahim Makolli, and Veljko Odalovic, respectively.

The excavation and exhumation process in Kizevak took place in two phases – from November 30th to December 9th last year and from May 5th to May 26th.

In the second phase, apart from the continuation of the excavations, a full assessment of the marked mass grave was made and all sets of remains of the war victims found at this site were exhumed, the Pristina government confirmed.

Based on an anthropological examination, it was concluded that at least nine sets of remains were exhumed. In the first phase of the exhumation process, two people were identified using the DNA method.

Previously, families of missing persons and a senior delegation of the International Committee of the Red Cross from Geneva, accompanied by representatives of two delegations within the Working Group on Missing Persons also visited the site of the mass grave in Kizevak.

Excavations to be carried out in Djakovica/Gjakova, Prizren, and possibly Mitrovica this year

At the end of last week, Kushtrim Gara from the Kosovo Commission for Missing Persons confirmed for Kosovapress that the identified remains belong to Albanians killed in the village of Rezala on April 5th, 1999. Gara also said that the families were notified and will take possession of the remains.

Although Kizevak was a priority for the Albanian side, excavations in Prizren, Djakovica/Gjakova, and possibly Mitrovica are expected this year.

„Three locations were excavated, the location at the city cemetery in Djakovica, in Brekoc in Djakovica, where the remains of one person, a war victim, were exhumed. The remains of one person were also exhumed at the location ‘Arbana’ in Prizren, while no remains were found at the Muslim cemetery in Mitrovica, but the possibility of returning to these locations is not ruled out,“ Gara said last week.

There was no confirmation of whether excavations will be carried out in Kosare.

Excavations at the Kizevak site started in November 2015, at Serbia’s initiative. Before this process began, Kosovo officials also spoke of the possibility of excavations at this location.

Today, the Kosovo government once again highlighted that its priority is to shed light on the fate of missing persons, to improve legal and institutional relations with their families, and bring justice.

In June 2014, 47 sets of remains of missing persons from Kosovo were found at another location in Rudnica. As Natasa Kandic from the Humanitarian Law Center explained at the end of 2020, after the bodies of 47 civilians from the villages of Staro Cikatovo and Rezala were found at a nearby location in Rudnica, the remains of 15 more civilians were still missing – 10 from Rezala and 5 from Zabelj and Gladno Selo. Kandic also blamed Dikovic’s 37th Motorized Brigade for their deaths.

The president of the Serbian Commission for Missing Persons, Veljko Odalovic, recently emphasized that the Serbian side will not reject any request from Pristina. Belgrade has so far provided more than 2,500 documents from its archives, while Pristina has not submitted any, Odalovic claims.

„As they ask of us, we ask them to be more concrete, precise, more detailed and convincing. We are absolutely open to all requests,“ Odalovic underlined.

Belgrade submitted a request to examine several locations in Kosovo which it suspects to contain mass graves. These locations include Kosare, Javor near Suva Reka, Dojnica near Prizren, Baljevac, Lapusnik, and Budusavci, Odalovic said in an interview with RTK2 in mid-May, noting that they are waiting for the permission of the judicial authorities.

The search for a potential gravesite of six Serb soldiers in Kosare is expected to begin soon, which we learned about in November last year, Odalovic confirmed. He revealed that there is even a video of the burial of the persons the Commission for Missing Persons is searching for.

Odalovic stated that the International Committee of the Red Cross, as well as UNMIK and EULEX, have been informed about this.

„A video surfaced in Pristina, which shows the Kosara area and soldiers of the so-called Kosovo Liberation Army (KLA) standing, in uniform, on the bodies of killed soldiers and digging a grave next to them in which they bury them. In Pristina, we handed over a CD with that video and pointed out to those people who are talking about those events, that we need to go to the location in Kosare as soon as possible and try to find the right place and start the exhumation. Immediately after this meeting in Pristina in November, we went to Kosare, visited the possible locations (cf. of gravesites). The Pristina side has undertaken to conduct further talks with persons who could more accurately indicate the site. At the meeting of the working group in April, it was announced that they would receive an order very soon and that we would search the location together,“ Odalovic recently told RTS.

There is also other video footage that could possibly reveal the fate of a missing Russian volunteer. The video shows people wearing KLA uniforms taking documents and Russian rubles from the pocket of a body in the stages of decomposition – the ID proves that he was a volunteer. In the video, the people in KLA uniforms say his name – a Russian name – and indicate that he was the captain of „Serbian paramilitary forces.“ The footage also shows a Zastava M84 machine gun with optics and a pile of Serbian documents, ID cards, and driver’s licenses, which show that they belong to young people from Celje, Nis and Bijelo Polje.

„It is also a fact that one Russian volunteer disappeared in Kosare. In the meantime, we got in touch with the soldier’s sister and now we are in the process of taking blood DNA samples,“ Odalovic said last week.

A soldier of the 125th Brigade, Zoran Veselic, is the only one of the seven missing soldiers from Kosare who was found and buried at the beginning of this year in Lacarak near Sremska Mitrovica. He died on April 19th, 1999, on Maja Glava. Serbia is searching for 24 missing soldiers in total.

According to the latest data, out of 6,054 missing persons, 1,639 are still listed as missing – including 570 Serbs and members of other non-Albanian communities.

One of the points of the agreement signed in Washington, as well as the new phase of negotiations in Brussels, launched last summer, which includes the issue of resolving the fate of missing persons. As Miroslav Lajcak, the EU special envoy for the dialogue between Belgrade and Pristina, confirmed, the chapter of the future “comprehensive agreement on the normalization of relations” on the missing has already been concluded. Since then, the topic of the missing has been brought to the fore – primarily the excavations. According to information available to the public so far, excavations are being carried out in Kizevak near Raska, at the Muslim cemetery in North Mitrovica, Orahovac, and Prizren.