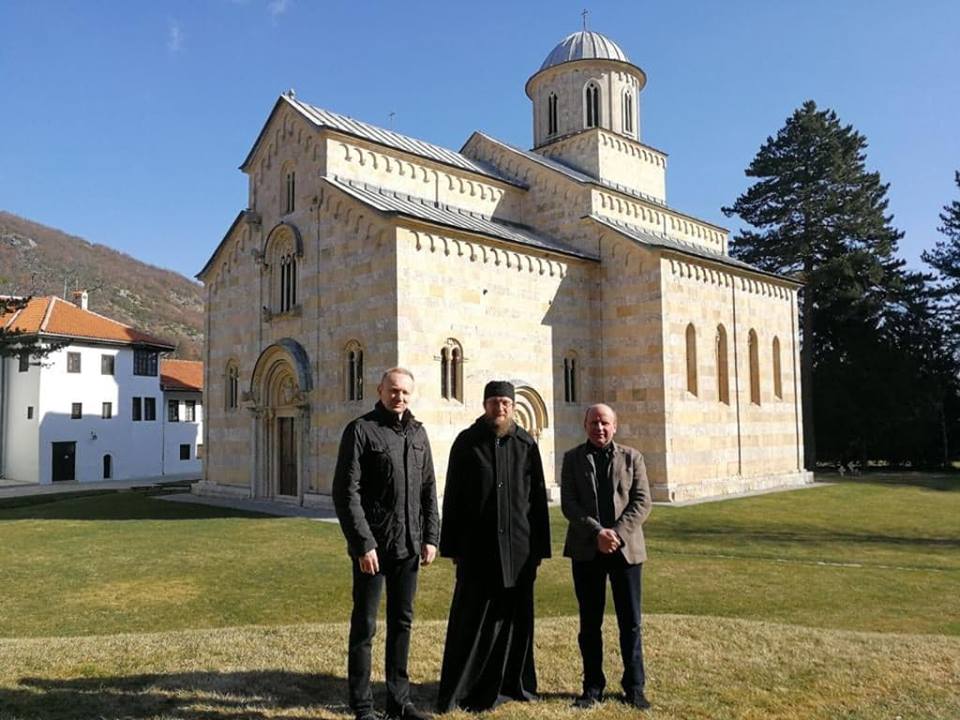 One of the leaders of the Alliance for Serbia, Dragan Djilas visited the Visoki Decani monastery and the Prizren Seminary during his two-day visit to Kosovo. Djilas reiterated “the need for the peace of the two peoples” and the common fields of cooperation, emphasizing that he is against ethnic delimitation.

„I’m not strolling around Kosovo and I am not dividing people. I’m listening and learning – with Bishop Teodosije, the Prizren Seminary students and Abbot Sava Janjic today in Prizren and Decani,“ Djilas tweeted yesterday, while also sharing photos of his second day of his visit to Kosovo.

Djilas expressed his admiration for the Decani monastery, stressing its importance not only as a part of Serbian culture and history but also as a part of political “world heritage.”

„I’m really happy how it looks today and how it is developing. It gives some sort of hope and faith to all the people who have stayed to live in these difficult circumstances, to have a place to show where they belong and to whom they belong,“ he said on the „Nase Jutro“ morning show, which is broadcast at the radio station Gorazdevac and TV Kim.

Djilas later visited Prizren Seminary where he talked with the students and Bishop Teodosije.

„The Alliance for Serbia and I do not support the delimitation“

Djilas reiterated on the “Nase Jutro” show that the Alliance for Serbia and he do not support the idea of „delimitation, partition and similar things.“

„We believe that this is dividing our people living in Kosovo and we believe that this will start a domino effect which will spread to the entire region, which would then be the hostage of all this in the coming period,“ he said.

The Alliance for Serbia leader stressed that relations between Serbs and Albanians are „much worse than they were ten years ago.“

„I am afraid that today the relations between the two peoples are under such tensions and that they are much worse than they were ten years ago, when very bad things were happening, and then some kind of normalization happened. Such hatred and such nervousness and aggression are present again now, which is really not good,“ he stated.

Instead of discussing delimitation, Djilas said that the topic of negotiations should be „the life of people in Kosovo“.

„I think that we should return to the idea that every citizen, who lives today in Kosovo and Metohija, will live better. How to promote those people, who were members of one nation in the winds of war, while keeping safe the members of another nation. Let’s open up all economic ties and cooperation, economic, cultural cooperation, so that people can travel freely, live and simply forget this and stop thinking about borders,“ Djilas said.

The founders of the Alliance for Serbia, Dragan Djilas and Slavisa Ristic, the local activists from the opposition movement „Otadzbina“, accompanied by Dr. Marko Jaksic, and Dr. Aleksandar Corac visited Leposavic on Tuesday where a group of about 20 young men caused a verbal incident.

‘Otadzbina’ claimed that President Aleksandar Vucic is responsible for this incident, at whose initiative the people of “Zoran Milojevic – Zelja, a member of the executive committee of the Serbian Progressive Party“, organized a verbal attack in Leposavic. Milojevic denied these allegations to KoSSev, claiming that he did not know about the visit.