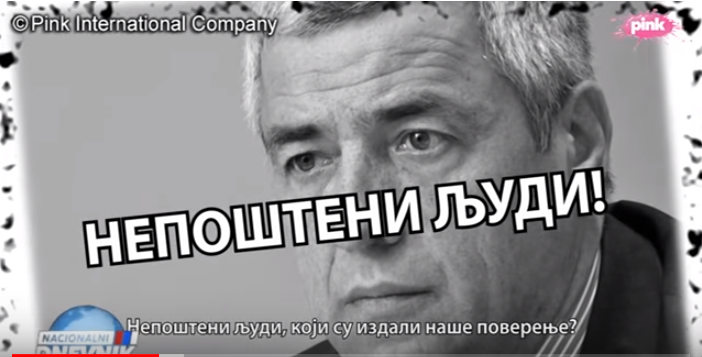 „What kind of man is Oliver Ivanovic, a candidate for mayor of Kosovska Mitrovica? Only a few hours after he left the premises of his party, the XX brother (full name in the video) of a candidate from Ivanovic’s electoral list, brutally stabbed a young man XX (full name in the video) with a knife, who then passed away. Oliver Ivanovic did not cry over this murder, but he did manage to cry for his Volkswagen Passat for 15 days. Is a member of the Volkswagen family more important than the life of a member of the XX family (full name in the video) to Ivanovic? Do we want such people to represent the interests of the Serbian people in Kosovo and Metohija? Do we want to be led by people who care more about their cars than the lives of their fellow citizens?! Unscrupulous people who betrayed our trust, people who have the support of Pristina! On October 22nd you choose. Make a smart choice! „

The choice of words of the ‘pre-election’ video were read at prime time during the news on TV Pink and TV Most. The video aired during the national news at 11.26h on October 16th, 2017, it was preceded by statements by the Director of the Kosovo Office, Marko Djuric and the Mayor of North Mitrovica, Goran Rakic talking about an “anti-Serbian” coalition.

The most exposed leader of Kosovo Serbs since 1999, was hit with six bullets in the back, at around 8:15am, on this day five months ago, in front of the office premises where he went to work for almost 20 years, in the centre of northern Kosovska Mitrovica.

He was buried in the Alley of Distinguished Citizens in Belgrade. The murder passed without a commemoration in the municipality of North Mitrovica, where he was a counselor, a large crowd of people escorted him through the streets – behind his coffin and along the side.

Marko Djuric, along with the Serbian Prime Minister Ana Brnabic, knelt in front of his grave, Goran Rakic was also present at the funeral.

So far, in public, there are officially no results of the investigation. There has been no progress, although there are two investigations – in Belgrade and Pristina, however, according to several announcements by the Serbian President, Aleksandar Vucic, and Kosovo’s Hashim Thaci, concrete information is expected soon.

Less than a week ago, in the Memorial Room of “Kosmet victims,”– on the day the NATO bombing ended, a photo of Oliver Ivanovic, with his second wife, Milena Popovic and Marko Djuric, was included among the photos of missing and kidnapped Serbs.

„Pass on: ‘Stop the dialogue in Brussels!’ We will not have dialogue with Albanian criminals, we want talks with the United States! „- said the President of the Association of Families of Kidnapped and Murdered Serbs in Kosovo, Simo Spasic.

Below you can see the AP archive videos of this „self-proclaimed“ Kosovo Serb leader during the initial post-war years: