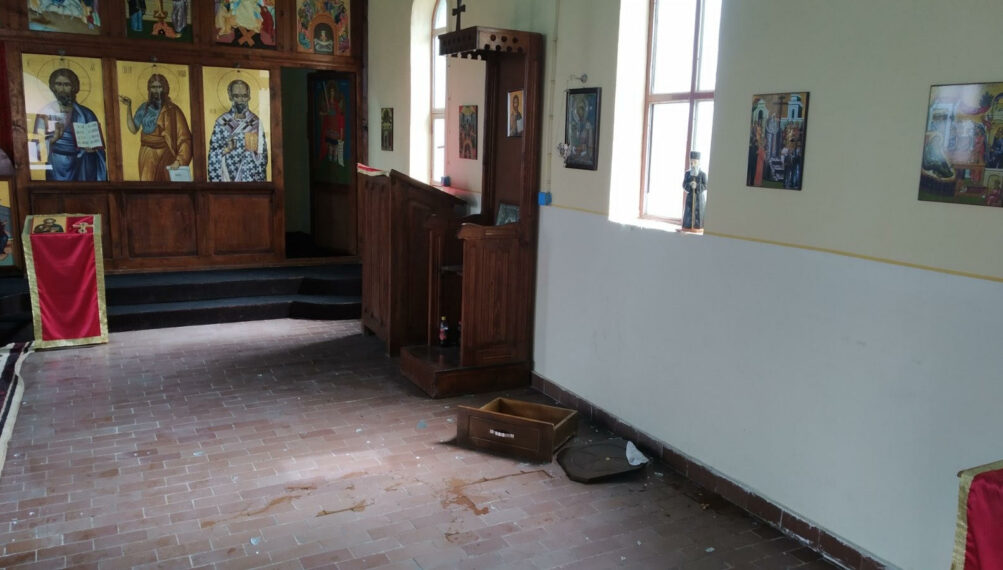 According to reports submitted to the Diocese by parish priests, the burglaries took place at the following locations;

The Church of the Holy Apostles Peter and Paul in Klokot, on March 6th, when unknown perpetrators broke into the church, damaging the front door and breaking a window. They attempted to scrape the gold leaves off the central icon (thus damaging it) with a blunt object and stole about 200 euros.

The Church of the Holy Trinity in Partes, on the same day. In the early morning hours of March 6th, unknown perpetrators broke into this Orthodox Church. The church was ransacked and the cash register was broken into, where the money from the sale of candles on the occasion of religious memorial services was kept. An unknown person took the Shroud from the tomb of Christ, the icon of St. John the Baptist, and 15,000 dinars and 70 euros from the cash register.

In the village of Gornja Gusterica in the municipality of Gracanica, on the night between March 15th and March 16th, the Church of Holy Sunday was broken into and looted. Money from icons in the amount of 5,000 dinars (45 euros) was stolen from the church, the front door was broken and church property was damaged. The residents of this village noticed the burglary in the morning along with the local priest and informed the police, who inspected the scene.

In the municipality of Strpce, in the villages of Drajkovce and Donja Bitinja, on March 13th, a local priest reported a burglary and robbery in two churches in his parish: Unknown persons forcibly entered the Holy Forty Martyrs of Sebastia Church in the village of Drajkovce, where a certain amount of money was stolen. In Donja Bitinja, the church and the church bell tower of the church of St. Dimitrije were broken into, the front door was destroyed, and 3,000 dinars were taken from the church.

In the municipality of Pec/Peja, in the village of Vitomirica, on March 12th, a priest reported that a parish home under construction next to the church of St. Apostle Luke has been broken into, whereby construction material worth about 4,000 euros was stolen.

All cases were reported to the Kosovo Police, the Diocese added.

„The Diocese of Raska and Prizren once again expresses its deep concern over the frequent cases of burglary of our churches in Kosovo. Such a high number of burglaries and thefts in a short time cause unrest among our clergy and people, especially in these holy days of Lent,“ they said in a statement.

The Diocese called on the Kosovo Police, but also international organizations to do everything they can to prevent attacks on religious buildings and to bring those responsible to justice. Frequent thefts and burglaries of our churches also show that it is necessary to take additional security measures – the Diocese concluded.