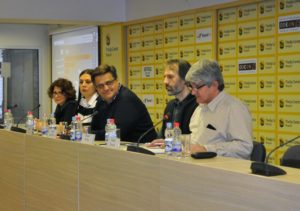 The Bureau for Social Research (BIRODI) revealed in its “Alarm media monitoring” report that the President of Serbia, Aleksandar Vucic was presented in a dominantly positive light on the daily news on RTS and TV Pink, as much as 98% of the time on the latter. Opposition representatives, on the other hand, were presented in a far less favorable light and they were also censored, the survey revealed. BIRODI’s report was the result of a three-month-long monitoring of national frequency channels.

BIRODI’s report also said that the Prime Minister, Ana Brnabic and the Foreign Minister, Ivica Dacic were presented „as extremely positive“ on RTS.

Opposition politicians such as Vojislav Seselj, Zoran Zivkovic, Djordje Vukadinovic, Boris Tadic and Zoran Lutovac were presented „positively“ (shown in a positive light around 50% of the time out of the total coverage time), but for „immeasurably shorter period“.
BIRODI stated that at the same time, RTS presented Dragan Djilas and Sergej Trifunovic in a bad light in over 50% of their coverage, while opposition leaders, representatives of national minority parties and opposition MPs such as Sasa Radulovic, were “censured”.
During the observed period, Vojislav Seselj, Nenad Canak, Cedomir Jovanovic, and Milos Jovanovic were featured on TV Pink with over 50% of „positive time“, while Zoran Lutovac, Zoran Zivkovic, Vuk Jeremic, Dragan Djilas, Boris Tadic, and Bosko Obradovic were negatively represented.

Based on a survey conducted from September 1st to November 30th, 2019, the organization determined that there were certain indications that two of the most influential national-frequency television stations in Serbia – RTS and TV Pink – violated the Electronic Media Law.

In this period, RTS and TV Pink „reported positively on government representatives, while reporting negatively or censoring some members of the opposition,“ BIRODI writes, adding that thus their viewers „were denied objective, truthful and impartial reporting on political actors.“

BIRODI then announced that it „urged the Regulatory Authority of Electronic Media (REM) to ensure legality under the Electronic Media Law“ so that RTS and TV Pink „establish a time and tone balance while reporting on all relevant political actors in their central news programs.“