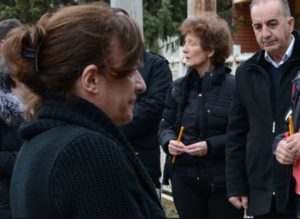 A longtime associate and friend of the assassinated Kosovo Serb politician Oliver Ivanovic, Silvana Arsovic was summoned for questioning as a suspect in the investigation into Ivanovic’s murder for the third time. „She is shocked, as she was the previous two times and she will, of course, respond to the summons as she has done so far,“ Ivanovic’s associate and GI SDP councilor, Ksenija Bozovic told KoSSev.

The summons, which arrived at Arsovic’s home, reads that she is to report tomorrow to the Kosovo Special Prosecution Office in Pristina – which is conducting this investigation.

„It is interesting how Silvana was called back for questioning at this moment. What can she present as new information 19 months after the murder, since she has already been questioned?!“ Bozovic told KoSSev, stressing that she is unsatisfied with the ongoing investigation.

Bozovic remarked that she could not help but notice that the summons came “at the moment when specific names of the Serbian opposition, including those of the GI SDP, were previously publicized,” in connection with their mutual agreement on future common political actions.

Why was she blamed? Is it because she was at her workplace that morning and was waiting for her boss to make him coffee?!

According to Bozovic, the public knows “perfectly well how loyal Arsovic was to Ivanovic”.

„She cannot be blamed for anything else. It is known that she was his closest associate for years, as well as his most loyal friend,” she added.

Once again, Bozovic recalled what happened immediately after the murder – when Ivanovic’s associates „did not get the approval“ to watch the video footage and when the police insisted on „taking the footage as soon as possible“.

„We were in the hospital, we still did not know that Oliver had passed away, when they picked us up from there in a hurry and brought us to the office to hand over the videos to them and they did not have a court order. They insisted so much that the only thing I could do was ask lawyers to come, which happened, and they took the footage without a warrant, but in their presence,“ Bozovic explained.

When asked who insisted on it, Bozovic said that several persons were present and that they introduced themselves as investigative bodies from Pristina and Mitrovica.
„Conversely, they did not allow us to see the videos, although we requested,“ Bozovic underlined.

The GI SDP official reiterated her dissatisfaction that the investigation is at a standstill and that, in her words, the true culprits – the perpetrators and the instigators are not being prosecuted.

Vlajic: The police has the right to take any evidence

On the other hand, lawyer Nebojsa Vlajic says that police authorities did not need a court order to take the footage.

„The police has the right to take any evidence. They don’t need any warrant. They came to investigate, they were following the instructions of the public prosecutor that day – I saw him in the hospital. They have the right to take the cameras. If someone objected to them taking the cameras, then he would be arrested and charged with hindering prosecution,“ Vlajic emphasized.

No information from the Special Prosecutor’s Office

The prosecutor in charge of the case, Syle Hoxha refused to answer KoSSev’s questions and referred us to a spokesperson for the Special Prosecutor’s Office, Ekrem Lutfiu. Lutfiu, however, also did not want to answer questions by telephone, explaining that he does not understand Serbian well and requested that we send our questions in writing.

A longtime secretary and associate of Oliver Ivanovic, Silvana Arsovic is suspected of „aiding and abetting with the aggravated murder“ in the case of Oliver Ivanovic. At the end of November last year, just days after the arrest of suspects involved in the murder of Oliver Ivanovic in the Gray building in North Mitrovica, Arsovic was also questioned in Pristina, after which she was remanded custody. She was released after a night spent in custody and, as it was explained at the time, was unable to address the media.

The most prominent Kosovo Serb politician, Oliver Ivanovic was assassinated almost 19 months ago. No charges have been filed yet and the trial has not started.

Letter of intent signed on direct flights between Belgrade-Pristina: A historic...