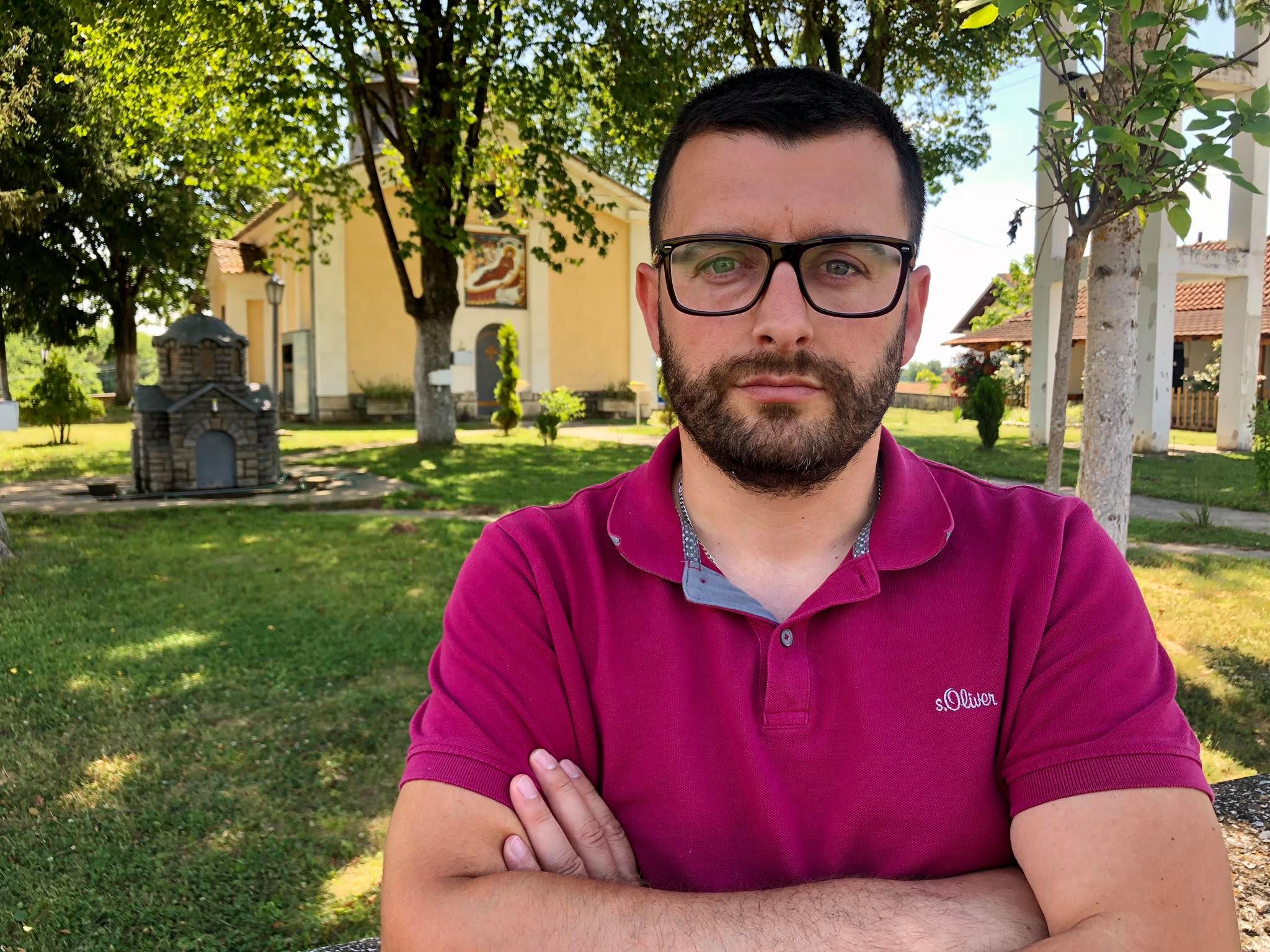 The editor-in-chief of Radio Gorazdevac, Darko Dimitrijevic sent letters to both the Journalists’ Association of Serbia – UNS and NUNS, warning them of the recent media content produced by Belgrade based Večernje Novosti while reporting on a Serbian priest who allegedly removed an Albanian flag from the war-torn battlefield of Kosare while being filmed.

The daily newspaper Vecernje Novosti recently published two texts: „EXCLUSIVE VIDEO: Serbian priest takes down the Albanian flag that has been displayed on Kosare since 1999 (VIDEO)“ and „ALBANIAN REVENGE FOR REMOVING THE FLAG: Terrorists came to Kosare, and what they did is an insult to all Serbian victims! (VIDEO).“

This paper revealed alleged exclusive recordings, while also claiming that a Serbian priest who came from the vicinity of Belgrade to Kosovo for the annual requiem service took down the Albanian flag at Kosare. The daily followed up the news with a report of an alleged revenge of Pristina: „Albanian terrorists set up two Albanian flags at the same place yesterday, while the so-called Kosovo police announced that they will launch an investigation and file a lawsuit against the Serbian priest.“

The recording was published only a short while after another news story was revealed to the public – that Serbian representatives and members of the Kosovo Commission for Missing Persons stayed at Kosare, searching for the bodies of 7 killed Serb soldiers.

These texts led to a series of negative reports by the Kosovo media and a negative public reaction in Kosovo.

Dimitrijevic has since alerted media associations in Serbia to a possible endangerment of the safety of Kosovo Serbs, clergy and journalists in Kosovo with such biased reporting.

And while the Journalists’ Association of Serbia shared Dimitrijevic’s letter in its entirety, it nevertheless stirred the author’s disappointment while lacking no other commentary from the media community.

„Dear colleagues, as someone who lives and works in Metohija, I am interested in whether you will react to the media reports about these ‘battery-operated patriots’, whose posts on social networks were shared by some Belgrade newspapers?

Because of such texts, we are the ones who are suffering, not only media workers but all of our people living in Kosovo and the clergy of the SOC.

Where is the code of ethics in all of this? Do you condemn the reports of V. Novosti, which directly endanger our lives and security?

Do you think that associations should react publicly, or are we doomed to react to your non-reaction via Facebook, in the hope of encouraging your reaction?

Writing on behalf of the workers of Radio Gorazdevac, who are members of Journalists’ Association of Serbia, Darko Dimitrijevic, the editor-in-chief.”

„I will remind that what I wrote in the letter is not a comedy, but media language that endangers the general public and, above all, the security of all Serbs living in Metohija, and that is why the journalists’ association should react,“ Dimitrijevic told KoSSev.

„I do not blame or justify the people who were at Kosare and who did what they did and then fled to central Serbia – that is their business. I think that the colleagues who published it in such a way made a mistake in doing so and I publicly claim this. I just think that there is no place in the media for content interpreted in such a way. What is the point of that? In my opinion, it only serves as sensationalism and the sale of newspapers that publish it, while Serbs who remain living in the villages and churches in Metohija represent the collateral damage of someone’s writing for the sake of a larger distribution. Such a text does not help anyone, not even us who, after all the suffering we endured, remain here,“ Dimitrijevic told KoSSev.

He revealed that he talked to some of the priests who live in towns where Kosovo Serbs live no longer.

„due to such news published by Novosti, these priests are now afraid for their safety because they wear the same cassock as the priest who allegedly came from Belgrade because someone could stone or attack them.“

Dimitrijevic, who lives in Gorazdevac with a wife and two small daughters is now fearful for the safety of his family as well. Instead of spending his free time in Visoki Decani – where they often attend the liturgy together – he changed his plans,

Driving a car with Serbian license plates does not provide him conformity any longer. He has a message to some of his fellow colleagues in Belgrade:

„I would like to say to the editors of the Belgrade media that before they send journalists to Kosovo, they should contact any of my colleagues who live and work here because that is the only way to understand the dimensions of life, work, and the struggle for their rights in Kosovo, instead of inciting inter-ethnic tensions“.

Father Sava Janjic: Such irresponsible behavior does not help those who remain in Kosovo

Even the Abbot of Visoki Decani, Father Sava Janjic reacted earlier this week on the same occasion. He distanced the Diocese of Raska and Prizren from the person who is represented as an alleged Serbian priest. Janjic distanced the Diocese from any activity that in any way endangers relations between ethnic and religious communities.

„Irresponsible behavior of individuals who come to Kosovo just to record sensationalist videos causes damage primarily to our people who stayed here. We sincerely hope that those who cannot help us – don’t hurt us with irresponsible behavior,“ he said.

At the same time, he said that the media that give attention to „this Facebook exhibitionism of individuals, who have no empathy for others, are equally irresponsible.“

While confirming that Serb priests in Kosovo regularly pray for all our fallen, especially for the youth who perished in the whirlwind of war, Abbot Sava Janjić undelined:

„Serbs who stayed in Kosovo for 20 years are paying the price for the ‘heroism’ of those – not those who suffered defending their own or bravely stayed at their hearths – but those who caused suffering onto others and then fled and declared victory.“

Pristina media: „They pretended to be American journalists“, „BIA agents“

In the meantime, the Kosovo media wrote dozens of articles about this event, publishing several speculations and reactions of politicians. „Scandalous – Serbian priest removed the KLA flag that has been displayed on Kosare since 1999“ – reads one of the typical headlines.

„Serbs who removed the Albanian flag at Kosare introduced themselves in Junik as American journalists and they were warmly and respectfully welcomed,“ the Syri.net portal reported. The text further stated that „it is possible that the video was recorded when Rame Manaj was with Serbian officials in Kosare to find the remains of several Serb soldiers who were buried there.“

Moreover, some portals published a photo of the alleged „BIA agents“, who removed the Albanian flag while introducing themselves as American journalists. „Exclusive: These are two BIA agents who disguised themselves as American journalists, looking for potential graves in Junik and Kosare,“ writes the Arbresh.info portal, which also published a photo.

The video material from Kosare was published almost immediately after Rame Manaj from the Commission for Missing Persons, who is also Hoti’s advisor, revealed in a talk-show on T7 that a Serb delegation visited Kosare on October 6th to search for the bodies of soldiers killed during the Kosovo war.

„They were looking for the bodies of 7 Serbian soldiers who died in the war in Kosare. According to the information and some satellite photos, we inspected the terrain, now it is expected that we offer access to those places where their bodies may be – one by one,“ Manaj said in a talk-show on T7 on October 7th.

After the media extensively reported on the event, the Kosovo police even conducted an investigation in Kosare, where, as they wrote in the daily report, they found and seized a bottle of wine. Also, the Kosovo Police revealed that the national flag of Albania was found intact and at the place it was displayed.

Borell and EULEX’s request for extension to time limit for written...