Kosovo central institutions displayed the Kosovo flag on a medieval Serbian fortress near Novi Brdo, while several military tents, where about a dozen people in uniform can be seen, were set up near the St. Nicholas Church, the RTS reported.

The Eparchy of Raska-Prizren confirmed the news via Twitter, describing it as a „huge provocation“.

The photos they shared show a military truck parked near the temple foundations, army green chairs, a tent and a banner that reads, in Albanian, „Dani Artane (the Albanian name for Novo Brdo) August 15th“. The logo of the Kosovo government and the logo of the Kosovo Institute for the Protection of Monuments can also be seen. Until this news was published, Kosovo media did not report any details on yesterday’s event and not a single Kosovo official reacted so far.

The Kosovo Ministry of Culture, however, posted on its site certain details about yesterday’s event which was co-organized by the Kosovo Institute for the Protection of Monuments. Judging by the Facebook posts of those who attended the cultural event, a similar manifestation was organized on May 6th of this year, during the feast of St. George.

The head of the Kosovo Office, Marko Djuric also reacted, emphasizing that the Fortress of Novo Brdo is one of Serbia’s key historical and archeological sites. He assessed the attempts to portray it in a different light as „calculated to further deepen the ethnic gap in Kosovo and Metohija.“

„In the Middle Ages, Novo Brdo was a multi-ethnic city, inhabited by Serbs, Saxons, Greeks, Dubrovnik people and many others, and it testifies to a time quite different from today, in which Kosovo and Metohija, under the rule of Serbian monarchs and rulers, was a place of contact between culture and civilization,“ he said.

According to Djuric, that is why “those who want to make Kosovo mono-ethnic” chose Novo Brdo -in order to “hide the fact that at the time when it was the center of Serbian ethnic space, Kosovo and Metohija was one of the richest and culturally most advanced areas of Europe, with their impudent and unscrupulous provocations and falsification of history.“

„Setting up the flag of the self-proclaimed Kosovo in Novo Brdo, apart from being an act of gross historical revisionism, is also a kind of revenge against the defenders of that city, as due to their persistence this fortress has remained a symbol of Serbian heroism and resistance to this day,“ Djuric concluded.

Novo Brdo in the midst of interfaith tensions

The dispute of the legacy of the Novo Brdo fortress and church first appeared in the public in early June when Kosovo media announced the construction at the „cathedral in Artana, formerly Novo Brdo,“ claiming that the same site is a Roman Catholic church. The Eparchy of Raska-Prizren also reacted at the time, underlining that it is one of 40 special protected zones – which are subject to a special procedure under the Kosovo laws.

„This special procedure of determining if work can be carried out on a site depends not only on the decisions of Kosovo institutions but also the position of the Serbian Orthodox Church,“ the eparchy stressed.

The Roman Catholic Bishop of Kosovo Dode Gjergji and the retired Bishop of Bar Zef Gashi with their clergy and a group of believers served a mass in early August at the remains of the Orthodox Cathedral of St. Nicholas at the Novo Brdo fortress. As it was announced, the mass was held in commemoration of August 1 – the (Albanian) Diaspora Day and, for the very first time, at the “Catholic Church of St. Nicholas.”

The Eparchy of Raska-Prizren accused the diocese of Kosovo of violating correct interfaith relations and the Serbian Minister of Culture and Information, Vladan Vukosavljevic wrote to the Vatican on the occasion, provoking a sharp reaction from the former Kosovo Deputy Prime Minister, Enver Hoxhaj. In response, the Serbian Ministry of Culture told Hoxhaj to “face the truth and learn the facts.”

In addition to the tensions surrounding the church in Novi Brdo, a recent interview of Abbot SavaJanjic of the Visoki Decani Monastery for Voice of America, where he talked about the implementation of the decision of the Kosovo Constitutional Court on returning 24 hectares of usurped land to this monastery, stirred negative reactions from the Association of Kosovo Historians. They claimed that Visoki Decani is “an Albanian Orthodox monastery” and urged the Abbot to apologize for “the genocide of the Serbian people and state.”

The Visoki Decani monastery is the only Serb Orthodox monastery to remain under KFOR’s protection due to several armed attacks it suffered over the years, the last armed attack on the monastery was a hand grenade rocket attack in 2007.

After Islamist graffiti was drawn on the walls of the Monastery in 2014 and four Islamists, local Albanians, were arrested in 2016, KFOR reinforced the protection with more manpower and video surveillance.

In addition to Decani, other Serbian religious objects are under the protection of the Kosovo Police. 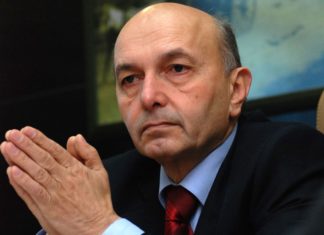