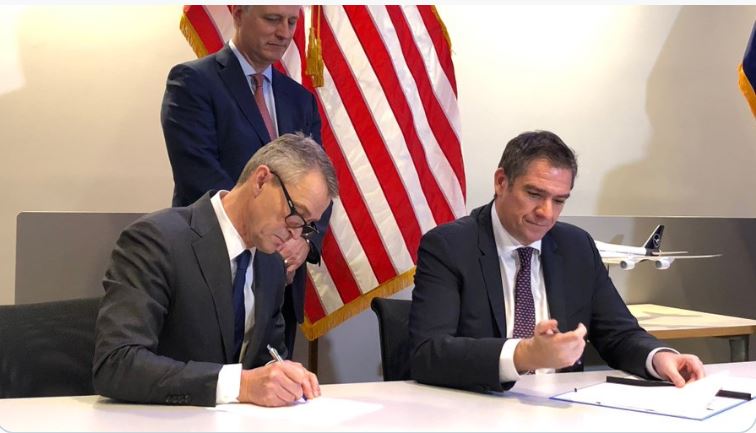 The Serbian Ministry of Economy, the Kosovo Civil Aviation Authority and Lufthansa Airlines suddenly signed a letter of intent to create a Belgrade-Pristina flight route. There was little reaction to this news yesterday, besides mutual congratulations of the participants in this process – which the public did not know was even taking place. Today, however, this news has caused controversy in the Serbian National Assembly within the opposition ranks.

During today’s national assembly session, an independent MP, Djordje Vukadinovic posed the question of whether the announcement that a Belgrade-Pristina airline would be created contains elements of a violation of the Constitution. Vukadinovic also wondered what the reason was for NATO to welcome a letter of intent to open a single airline route is, Beta news agency reports.

On the other hand, MP Aleksandar Seselj linked this news with the „little Schengen“ initiative. He then proceeded to call for the withdrawal from this initiative because, in his words, this agreement is a way for Serbia to eventually recognize Kosovo.

„As part of this (agreement), we will have a direct Belgrade-Pristina line, and we do not know how it was understood as being in the citizen’s interest. First of all, it was announced that there will be no continuation of dialogue until the taxes are abolished – and now we will not continue the dialogue, but we will deliver everything they ask for,“ said Seselj, Beta reports.

Metla 2020: An unreasonable and hurtful decision by the Serb government under pressure from mentors of Kosovo’s independence

The latest agreement between Belgrade and Pristina was also criticized by the Metla 2020 movement, led by the Democratic Party of Serbia.

„US President (Donald) Trump, Special Envoy for the Belgrade-Pristina Dialogue (Richard) Grenell, US National Security Advisor (Robert) O’Brien, and NATO Secretary General (Jens) Stoltenberg had a good reason to call the signing of a letter of intent with Lufthansa on the re-establishment of a Belgrade-Pristina direct line as another victory,“ they wrote in a statement.

The statement also said that „this is another victory of those who treat the self-proclaimed Kosovo as an independent and sovereign state and stand for its full international recognition, was made possible by the Serbian Government.“

Djilas: Why not Air Serbia; Vucic: Those people do not understand a thing

One of the leaders of the Alliance for Serbia, Dragan Djilas, also reacted to the news. Although describing the opening of the flight route as a “good thing,” Djilas also criticized the agreement itself, as well as the fact that Serbia continued negotiations with Pristina event though the taxes are still in force.

„It’s a good thing that a flight to Pristina exists. The bad thing is the fact that Air Serbia is not the one piloting that flight but Lufthansa because this essentially (but not formally) makes it seem that we have accepted that Pristina is not a city in Serbia. It is unnecessary to talk about him lying again and negotiating with Pristina even though the taxes were not abolished,“ Djilas tweeted yesterday.

He also revealed that the negotiations took a long while, as „the struggle with the Albanians was difficult for several months“, including for KFOR to mediate the process.

Finally, the Serbian president sent a message to the opposition in Serbia: „They do not understand a thing.“

Trajkovic: Vucic will give Kosovo to abolish the taxes as Haradinaj wanted

The president of the European Movement of Kosovo Serbs, Rada Trajkovic also criticized the suddenness and non-transparency of the first agreement reached between Kosovo and Serbia after a two-year long hiatus.

„Aleksandar Vucic and Ana Brnabic continue to privatize negotiations and sign ‘agreements’ on our behalf behind closed doors. The introduction of Kosovo taxes appears to have blocked negotiations in Brussels but not Grenell’s negotiations in Berlin. What is the point of principle when the survival of power is in question,“ Trajkovic tweeted, later adding that Vucic, judging by „him avoiding the EU in the negotiation process, would give Kosovo to abolish the taxes, just as the Haradinaj government, backed by Srpska Lista, had wanted.“

Milun Trivunac, secretary of state at the Serbian Ministry of Economy and Eset Berisha, director of the Kosovo Civil Aviation Authority (AVCK), signed the letter of intent yesterday at the US Embassy in Berlin, the Associated Press Agency reported. The signing was attended by the US ambassador to Berlin and Donald Trump’s envoy for the Belgrade-Pristina Dialogue, Richard Grenell, and US President Donald Trump’s adviser on national security, Robert O’Brien.

Janjic: Lesson for the EU

One of the rare positive reactions to the BG-PR flight deal arrived from analyst and director of the Forum for Ethnic Relations, Dusan Janjic. According to him, the news of reaching an agreement on launching air traffic is not a surprise, while its context is as it happened at a time when there was no dialogue between Belgrade and Pristina.

„That’s good news. It shows that the model that President Trump intended for Kosovo, and presented through Grenell and Palmer, functions, starting with small economic moves that are important to all people, to prepare the atmosphere for political talks. This is a demonstration of US influence and a serious lesson for the EU and its diplomacy and bureaucracy, which shows its willingness to prolong the problems for decades,” Janjic told RTV Kim.

Srpska Lista: A step towards breaking down barriers

This news was also welcomed by Srpska Lista. The largest Kosovo Serb party assessed that „the Serb people in Kosovo will only benefit from this initiative“.

„We are grateful to President Aleksandar Vucic, Serbian Prime Minister Ana Brnabic and the head of the Kosovo Office, Marko Djuric for having the wisdom and strength to show once again, in a time characterized by political uncertainty and the deterioration of the position of the Serbian people in Kosovo, that Serbia and the Serbian people are the axes of stability of the region,“ Srpska Lista wrote in a statement, RTV Kim reported.
Belgrade will be closer this way, they added.