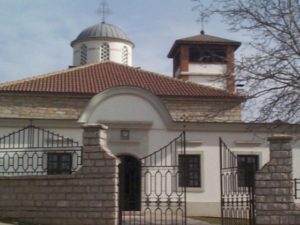 Kosovo news agency Kosovapress, followed by RTK, Gazeta Express, Telegrafi, Bota Sot, Kosovarja… published a text entitled „Serbian Church in Pristina fighting against COVID-19 with an unconfirmed Russian model“. The Eparchy of Raska-Prizren said the ringing of bells is a European legacy and that it is regulated by Kosovo law. The Eparchy described the article as unprofessional journalism and a dangerous drawing of a target on the SOC. Bishop Teodosije, however, still decided to reduce the ringing of bells in the church of St. Nicholas in Pristina.

„High-intensity bells ringing could be heard from the Church of St. Nicholas in Pristina for several days now in the name of ‘fighting against the coronavirus’. Local residents are disturbed over the noise they make,“ Kosovapress’s article said.

The article also notes, citing an unnamed resident, that although there were no reactions to the ceremonial events that took place in this church, the bells now ring so often that it represents a problem for the local residents.

Agim Musliu, presented in the article as a „security expert“, said that it is a „primitive Russian model“ but also a „provocative trend“.

„We are witnessing a deliberate spread of misinformation from Moscow regarding the humanitarian disaster caused by this virus. The Russians do not even spare their Orthodox believers to do what suits them. On the other hand, it is clear that people from the Serbian secret service are circulating through all churches, even this one. Where the Serbian secret service is, there are also the Russian secret service. Therefore, one can safely conclude that this is happening due to the chaos from Moscow. The world knows that everywhere there are Orthodox churches – there is one of their agents“

The portal “Crno Beli Svet” reported on the article yesterday, claiming that the news was misinformation. The same portal also published a statement by the Eparchy of Raska-Prizren about the meaning and significance of the bells, but also the Eparchy’s claim that the author of the article had not contacted them.

In the same article, the Pristina media refer to the writing of the research portal Krik, which also mentions bells and Russians. The portal, however, exposed the news reported by B92 on the daily ringing of bells at all city temples in the Serbian city of Jagodina at noon and calling for prayer during a pandemic, when a B92 reporter said that church bells „cure infections.“

This portal cited part of B92’s reportage, which states that Russian laboratories „have proven through testing that the oscillation of church bells repels plague, viruses and other airborne infectious diseases.“

Raskrikavanje also stated that allegations that the effects of church bells have been examined and proven to kill germs can only be found „on obscure Russian sites, as well as on sites of Russian churches, and that no specific research which found that church bells kill infections is mentioned anywhere in these texts.“

Time for solidarity: When the bells ring, we pray for the sick people and those who selflessly care for them in hospitals

The Diocese of Raska-Prizren reacted with a statement last night, saying that the article published by Kosovo portals is improper.

„The Diocese of Raska-Prizren of the Serbian Orthodox Church in this tragic time of the pandemic of the coronavirus regretfully receives this text that goes far beyond the most decent boundaries of professional journalism and exemplifies the targeting of the Serbian Orthodox Church in Kosovo, which has existed here for centuries,“ the Diocese wrote, adding that church bells often ring in times of great suffering, citing as an example a church in Amsterdam whose bells also ring as a show of solidarity during the pandemic.

The Eparchy also shared a list of Western websites that show that the same practice was introduced in countries all over the world, such as USA, Canada, France, Australia, and so on.

„The reason for this is, above all, for people to be encouraged to pray, to stand in solidarity, and to interrupt their regular jobs for a moment and remember God, no matter what religion they belong to.“

„When the bells ring, we pray for all the sick people, not only here, but around the world, for those who selflessly care for them in hospitals, and we pray to God for the epidemic to end and for life to return to normal.“

The Eparchy expressed an expectation that there would be no more articles like this during the pandemic, or comments from „uninformed and apparently malicious ‘experts’“, adding that this situation should “encourage solidarity, mutual understanding and an overcoming of all political and cross-national differences.”

Last month, the Diocese of Raska-Prizren issued instructions and advice to believers and priests regarding the exercise of their religious needs and the way churches and monasteries will function during the pandemic. One of the new measures read that church bells will ring every two hours between 8 am and 8 pm until the end of the pandemic.

A number of international institutions and organizations have recently warned about unprofessional and dangerous content published by some media, including RTK’s „inappropriate and unethical media reporting“ last week, when an RTK journalist reported „unverified claims“ and asked „provocative questions“ live from North Mitrovica on the evening news, sparking a wave of reactions in Kosovo. These organizations also warned that such comments could contribute to an increase in tensions between Serb and Albanian communities.