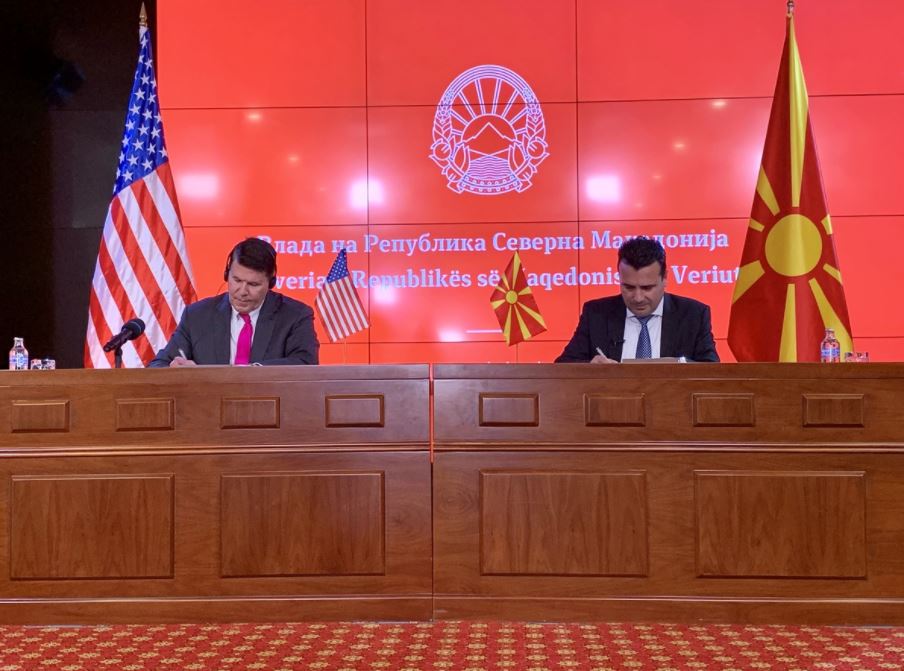 “With the triple signing of 5G security MOUs, Bulgaria, North Macedonia, and Kosovo have joined the Clean Network,” the US Secretary of State Michael Pompeo confirmed on Tuesday. He also published photographs from the signing ceremony held in North Macedonia.

“This growing coalition of Clean Countries and Clean Companies also includes 27 NATO, 25 EU, and 11 Three Seas states, as well as many top companies in the world,” Pompeo tweeted. The Prime Minister of Kosovo, Avdullah Hoti signed a memorandum of understanding with the representatives of the US on the creation of „secure networks“ of fifth-generation communications (5G) last week in North Macedonia.

The MoU was signed at the Kosovo Embassy in Skopje. Under Secretary for Economic Growth, Energy, and Environment, Keith Krach signed the memorandum on behalf of the United States. The ceremony was also attended by the US Ambassador to Pristina, Philip Kosnett.

The memorandum represents the beginning of the implementation of one point of the Washington agreement, as per which Belgrade and Pristina undertook to ban the use of 5G equipment coming from „untrusted vendors“.

Last week, the Prime Minister of Kosovo also met with representatives of the Regulatory Authority of Electronic and Postal Communications. At the time, he underlined that Kosovo would ban the use of 5G equipment coming from untrusted vendors.

The Belgrade and Pristina delegations, led by Aleksandar Vucic and Avdullah Hoti, signed two separate documents in Washington on September 4th, which were presented to the world as an agreement on economic normalization.

One point in this agreement reads that the parties undertake to ban the use of 5G equipment coming from „untrusted vendors“, and to remove such equipment where it is already present in a timely fashion.

The documents do not specify who the „unreliable suppliers“ of the 5G network are. However, this point of the agreement was interpreted as an attempt to prevent the Chinese company „Huawei“ from installing its 5G network technology.

The issue of the 5G network, that is, the issue of Chinese influence, was high on the agenda during Pompeo’s visit to the Czech Republic, Slovenia, Austria, and Poland earlier this year. „And no wonder: Beijing has been making inroads in Central and Eastern Europe (CEE) with investments and economic incentives through its Belt and Road Initiative (BRI) and its ‘sixteen- plus-one’ engagement strategy. In seeking to further roll back China’s influence, the US has targeted Huawei as the Shenzhen-based telecoms-equipment manufacturer competes for a prominent role in the region’s cellular network infrastructure and 5G expansion. The United States deems this not only a geopolitical challenge but a concrete security threat,“ the influential Atlantic Council wrote in a study published earlier this year.

They listed explicit statements and actions of Pompeo during his tour which were aimed at preventing the expansion of China’s 5G network. They also reminded of the previous European Union (EU) guidelines on 5G security.

„In January, the EU released a toolbox to help member states identify high-risk vendors as they build out their 5G networks. The measures do not name Huawei explicitly, but demonstrate a growing consensus within the EU over the potential risks Chinese suppliers pose to European cybersecurity,“ the US organization said.

The Three-Seas Initiative and the “17+1” initiative

The „Three Seas“ initiative is an economic-political project on forming an infrastructural connection between the countries of Central and Eastern Europe between the Adriatic, Baltic, and Black Seas. In 2014, the influential American think tank, the Atlantic Council published the document titled: „Completing Europe – From the North-South Corridor to Energy, Transportation, and Telecommunications Union“. The Atlantic Council called on political leaders on both sides of the Atlantic to create the political and financial capital necessary to carry out this strategic initiative.