Despite strong opposition from the public, Serbia’s Parliament passed the Law on Referendum and People’s Initiative and the Law on Expropriation last week. Environmental movements and activists claim the laws were adopted to enable the Rio Tinto company to dig a lithium mine in western Serbia, which incited a wave of mass protests across the country. Several politicians and activists have linked the referendum law to the Kosovo issue. The Serbian government has denied all allegations.

Referendum valid regardless of the number of voters

The Law on Referendum, which was supported by 178 MPs, and rejected by only two MPs, is set to regulate the manner of direct voting, i.e. citizen decision-making in a referendum, and how the people’s initiative would be realized in the future.

The central part of the Law is abolishing the census of half of the registered voters plus one for a successfully conducted referendum, so there is no longer a mandatory minimum of the number of people who are required to turn out for a decision to be valid.

Some experts harshly criticized such a provision of the Law, saying that the Government could use the Law to impose its political will, while the government has denied such claims.

One of the greater concerns among experts, NGOs, political parties and the general public is that it was adopted to enable the Rio Tinto’ lithium mine in the west of the country.

Part of the opposition says that the Government wants to use the Law to facilitate decisions concerning the resolution of the Kosovo issue.

On the other hand, the government denies such claims.

„This law has nothing to do with Rio Tinto or Kosovo,“ Minister of State Administration and Local Self-Government Marija Obradovic told the Parliament on Thursday.

The President of Serbia, on the other hand, claims that the Law on Referendum is actually a way for the EU to open two chapters to Serbia.

What did Vucic say about the referendum?

Last year, Aleksandar Vucic criticized the position of the opposition in Serbia that a referendum should be called in which it would be determined that Kosovo is Serbia, claiming that such a move would cause a conflict with the Albanians, leading to isolation and sanctions.

However, back in 2018, the Serbian President repeatedly promised that no solution for Kosovo would be officially accepted without a referendum.
„Whatever we do, we have to go the referendum route. Regardless of how we change things and in any way, whatever constitutional changes we bring, we have to go to a referendum,“ he said in mid-2018.

What do citizens believe?

When the Law was passed on Thursday night, we asked our readers whether they think it has anything to do with Rio Tinto and Kosovo or not, or only with one or the other.

A total of 670 users voted, the vast majority of whom believe that the Law is connected to Kosovo and Rio Tinto or either one of them.

Out of a total of 484 users who took part in the 24-hour poll on Instagram, only 101 believe that the Law on Referendum has nothing to do with Kosovo or Rio Tinto. On the other hand, 218 people believe the Law is linked to these issues. 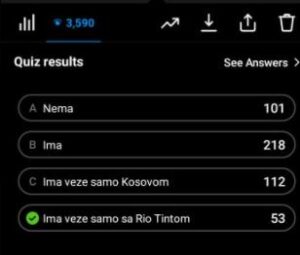 Out of 218 citizens, 112 of them think that this Law is linked only to Kosovo, while 53 of them – that the Law is only linked to Rio Tinto.

On Twitter, out of 58 citizens who participated in the poll, as many as 77.6% of them (45 citizens) think that the Law on Referendum is linked to both Kosovo and Rio Tinto. Only 8.6%, or five of them, believe otherwise. Also, 8.6% shared the opinion that the Law is linked only to Kosovo, and three, or 5.2%, that the Law has links only to Rio Tinto. 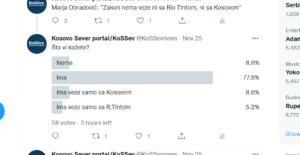 The results of the poll on Facebook are similar to the results obtained on Twitter and Instagram. A total of 128 readers participated in the poll, the majority of whom (59 citizens) believe that the passing of the Law on Referendum is linked to Kosovo and Rio Tinto. 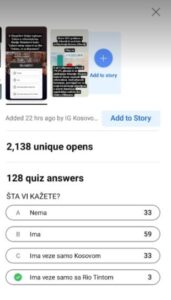 On the other hand, 33 citizens believe the law is not related to these two issues. The same number of citizens thinks that the Law is only linked to Kosovo, while three believe that the Law has connections only to Rio Tinto.

This Law, but also the amendments to the Law on Expropriation, garnered a lot of attention in the Serbian public. A mass protest on the occasion was held in Belgrade on Wednesday. On Saturday, several protests were organized in cities across Serbia at the same time, during which environmental activists and citizens blocked traffic. Several incidents and conflicts broke out during the protests. Another protest was held on Sunday and Monday.

The protests continued on Sunday in several cities in Serbia, including Belgrade. Citizens gathered in the evening on the Republic Square, announcing new gatherings next week and blockades of bridges and roads throughout Serbia, as a sign of protest against the adoption of these laws.