„Your efforts to respect and protect important monuments in Kosovo that are part of this rich tapestry of cultural heritage are greatly appreciated,“ the Prime Minister of Croatia, Andrej Plenkovic, told his Kosovo counterpart, Albin Kurti.

On May 20th, Albin Kurti sent a letter to 56 state leaders, including Serbia, reiterating the Kosovo government’s determination to „protect the entire cultural heritage, especially of minority communities, such as Orthodox churches and monasteries,“ the Kosovo government announced today.

The Kosovan Prime Minister called on the leaders of 56 countries to support Kosovo on its path of developing an „understanding that our rich cultural heritage is among the strongest complementary arguments by which our country contributes to the international community of nations, peoples, and cultures“.

Kurti received a reply from his Croatian counterpart, Andrej Plenkovic, this week, the office of the Prime Minister of Kosovo confirmed today, while also publishing Plenkovic’s letter.

„I fully agree that the history of the culture of each country and the embodiment of its cultural heritage must always be treated with due respect and protected for the benefit of our society as a whole. The role of cultural heritage is to convey the story of each of our national histories to future generations, to tell these stories in their entirety and preserve them for posterity, encompassing the wealth and diversity that are associated with each of our peoples“, Plenkovic’s letter reads.

Plenkovic wrote to Kurti that he highly appreciates „the efforts of the Kosovo government to protect important monuments in Kosovo that are part of this rich tapestry of cultural heritage“.

„The fact that you are committed to these efforts is encouraging. Preserving and sharing the vivid expressions of your country’s heterogeneous cultural heritage will undoubtedly provide a valuable share of the global cultural heritage,“ he added.

Plenkovic concluded that Croatia – a member of NATO and part of the KFOR mission in Kosovo – is also committed to preserving cultural heritage.

In the same period, the Prime Minister of Kosovo and other Pristina officials also wrote to international organizations for the protection of cultural heritage after Visoki Decani was nominated and then included in Europe Nostra’s list of 7 most endangered cultural heritage sites in Europe in 2021.

The decision triggered an avalanche of criticism in the Kosovo public, while Pristina officials sent multiple letters of objection to this organization, international officials, and UNESCO.

They claim that Visoki Decani, as well as other Orthodox churches in Kosovo, are not endangered, that they enjoy a high level of security, but also that these churches are part of Kosovo’s cultural heritage. 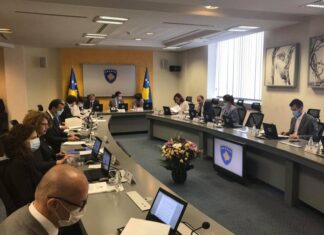