Kosovo purchased four UAS, the Kosovo Ministry of Defense confirmed today. This Kosovan ministry thus denied media allegations that as many as forty of these unmanned aircraft systems were purchased – as media outlets in Great Britain initially reported. The news was then picked up by Pristina and Serbian media in Kosovo, as well as by Belgrade-based media outlets.

It all began with a text published by Shephard Media yesterday – “Kosovo awaits Puma LE.”

In its text, Shephard “calculates” that Kosovo is obtaining 40 Puma LE reconnaissance UASs.

Referring to the US Department of Defense, they reported that the KSF will receive AeroVironment’s Puma LE UASs via the FMS program.

Although confirming the purchase of UASs, the website of the US Department of Defense, however, does not contain data on the number of UAS purchased by Kosovo. Instead, it only states that the purchase agreement was concluded with the California-based company AeroVironment in the amount of US$11,010,530.

This ministry also stated that these aircraft systems will be made by this company, as well as that they should be completed by January 25th this year.

In yesterday’s text, Shephard writes that Kosovo ordered 40 units in total based on an estimated unit cost of US$215,000.

Shephard’s news piece was first picked up by Pristina-based Koha yesterday. Citing the text of this London company, they reported that „certain US media“ reported that „the Kosovo Security Force will soon be equipped with 40 special aircraft units from the United States.“

The news from Pristina was soon transmitted by Serb-language media in Kosovo. KoSSev published this news as a translated text from the Kosovo press. Kosovo Online also reported on the „purchase of 40 UASs“ – also citing Koha as its source. Sputnik then picked up the news piece from this portal.

The text published by Sputnik was then transmitted by Belgrade-based portals and tabloids – Politika, Novosti, B92, Alo, Time.rs, and others.

The information about the purchase of unmanned aerial systems to be used by the KSF, however, does not come as a surprise as the procurement of military equipment from the United States was discussed since June last year when the Kosovo government announced that they were ordering four UAS for the KSF.

At that time, the Kosovan Minister of Defense, Armend Mehaj, said that last year’s budget reallocated €7.7 million for military procurement, but also that the Kosovo government allocated additional funds of €4.5 million for the purchase of UAS.

As Pristina-based Gazeta Express reported on June 26th of last year, the Kosovo government approved the allocation of an additional budget for the purchase of four UASs a day earlier.

As announced at the time, the total amount of money would be paid in two installments – one in 2021, and the other in March 2022.

LVV MP and former Minister of Defense of Kosovo, Enver Dugolli, said on the same day that the purchase of UAS is being done in coordination with the United States.

As Dugolli explained at the time, these are multifunctional unmanned aerial systems that will be used for reconnaissance and surveillance.

Sefer Isufi, Head of Strategic Communication at Kosovo’s Ministry of Defence, confirmed today that only four UAS were purchased, thus denying yesterday’s media allegations on the purchase of 40 units.

„We were surprised by the information published in some of our media outlets with the incorrect data on the number of 40 UASs. This is a procurement project for four UAS proposed by Minister Mehaj and approved by the government seven months ago.“

Furthermore, Isufi emphasized that this is just one of many projects that will be carried out jointly with the United States under the program of foreign military sales, which enables the sale of weapons. 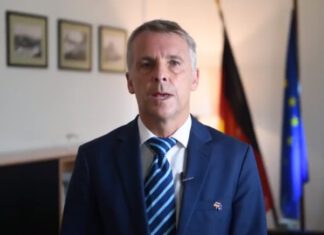