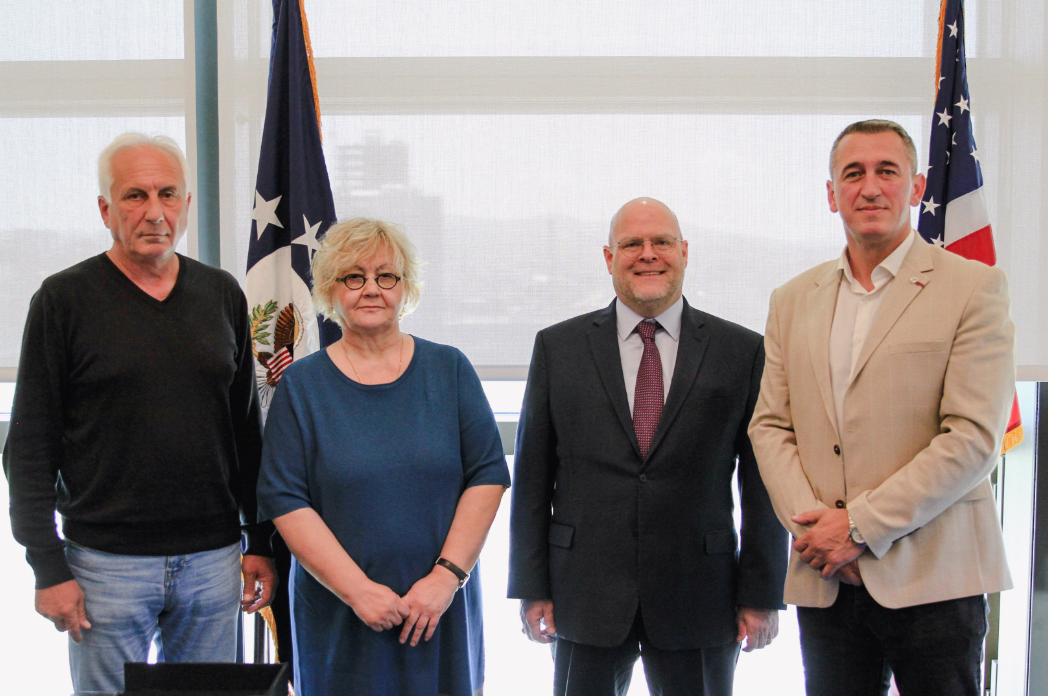 The US Ambassador to Pristina, Jeffrey Hovenier, met in Pristina today with three prominent Kosovo Serb politicians – Nenad Radosavljevic, Rada Trajkovic, and Nenad Rasic. They assessed the meeting as well-intentioned, open, serious and constructive, with an emphasis on the problems faced by the Serbian people in Kosovo. Kurti’s policy toward Kosovo Serbs, as well as the policy of Srpska Lista, was harshly criticized during the meeting, Trajkovic and Radosavljevic testified for KoSSev.

„Kosovo’s diversity is among its greatest strengths. Great to hear from diverse voices representing the Kosovo-Serb community and discuss how community leaders working together can ensure Kosovo delivers for all its citizens,“ Hovenier tweeted.

Rada Trajkovic described the meeting with the US ambassador as extremely benevolent and open. In a statement for KoSSev after the meeting, she highlighted the ambassador’s interest in the opinion of Kosovo Serbs of the policy of the current Kosovo prime minister, the policy of Belgrade, and the problems faced by Kosovo Serbs, as particularly important.

The opinion of the same people expelled from the political life of Kosovo Serbs by “the will of Mr. Vucic” – this university professor and leader of the European Movement of Serbs from Kosovo and Metohija, a former deputy of both the Serbian and Kosovo parliament, underlined.

„The meeting was very open, extremely benevolent, and I would say that for the first time in a long time, some of the international representatives were willing to hear the opinion of people who were expelled from Kosovo’s political life by Mr. Vucic’s will,“ Trajkovic assessed.

During the meeting with the ambassador, the Kosovo Serb politicians also criticized Kurti’s policies toward Serbs in Kosovo.

„Of course, we said that Mr. Kurti is not committed to any discussion with Serbs from Kosovo and Metohija, simply because every talk implies compromises, and he is not ready to offer Serbs anything. Not even what is guaranteed by the Constitution of Kosovo, such as the ruling of the Constitutional Court, such as the equality of languages ​​throughout the territory and in all institutions of Kosovo. In essence, he is implementing what he said – that the Serbian language can be used only in areas where the Serbian language is used,“ Trajkovic told KoSSev.

The director of Mir TV from Leposavic, former mayor and councilor, and also advisor to the head of UNMIK for returns, Nenad Radosavljevic, also described the talks with Hovenier as constructive, but serious.

„The ambassador gave an introductory speech without intending to presuppose anything. It was a good thing that we did not address global world problems in any way, but our everyday problems,“ Radosavljevic said in a statement for KoSSev.

„I spoke about the lack of fulfillment of Kurti’s pre-election promises, about the Serbian-Albanian talks within Kosovo, which were suspended from the PER Institute of Allen Kassof, through the Airlie Conference, to Pieter Feith’s attempt to establish a dialogue between Serbs and Albanians in Kosovo. I also spoke about corruption, which is especially pronounced among Serbs, because SL has a closed system through which it, via threats, blackmail, and pressure on paper, wins the elections, after which it ruthlessly robs the people,“ says Radosavljevic.

„I think that the ambassador, with his versatile approach to both institutional and non-institutional political and free-thinking structures, has opened the door to the civil sector, which will have something to say. The talks had no context other than sincere motives to contribute as much as we can to stabilizing the situation and lowering tensions between ethnic communities,“ Radosavljevic added.

The meeting between the US ambassador and the well-known Kosovo Serb politicians was held on the same day the SL representatives and their supporters traveled to Belgrade to show their support to the Serbian President Aleksandar Vucic, who took the oath of office today.

KoSSev’s interlocutors say that the meeting with the US ambassador in Pristina was already arranged several days in advance and that they have not connected these two events together.

Rada Trajkovic reveals that she does not mind that the meeting was held on the same day, reminding that she did not vote for Vucic in the presidential elections.

„I neither voted for him nor elected him, he was imposed on me and I have to live with this imposed solution for some time to come,“ she said.

Speaking of SL officials who went to support the ceremony in Belgrade, Trajkovic says:

„The fact that they came to him – they voted and showed the North Korean concept that 99 percent of people are for Vucic, which is ghastly.“

By the time the news was published, Nenad Rasic from central Kosovo has not responded to our calls.