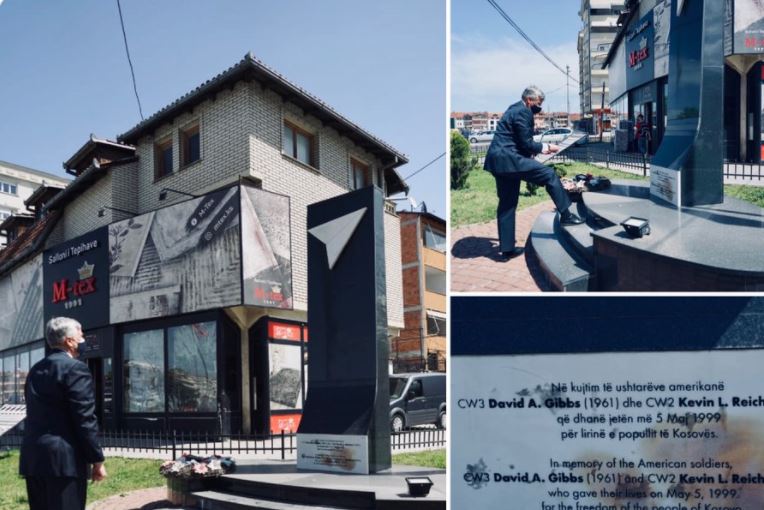 “This Memorial Day weekend we remember US Army pilots David Gibbs and Kevin Reichert who died on May 5th, 1999 when their Apache helicopter crashed during Operation Allied Force. US Ambassador Kosovo visited their Prizren memorial to honor their bravery and sacrifice,” the US embassy tweeted today, while also publishing the photographs of US Ambassador to Kosovo, Philip Kosnett’s visit to Prizren.

The monument in Prizren, in addition to the names of these American soldiers, states that they „gave their lives for the freedom of the people of Kosovo on May 5th, 1999.“

The Kosovo President Vjosa Osmani-Sadriu, with her husband and daughters, paid their respects to the late son of US President Joseph Biden – Beau Biden, at the monument erected by the Kosovo authorities in 2016 in his honor close to Bondsteel. The monument was unveiled by Joe Biden himself.

„Beau served in Kosovo, far from his family and country, in order to help the statehood of Kosovo and operations for the rule of law in our country. That is why we are laying flowers at the monument dedicated to him today, in memory of his service in our country, as well as all those men and women who stood by us during those challenging times, serving the peace and statehood of Kosovo,“ Osmani said. 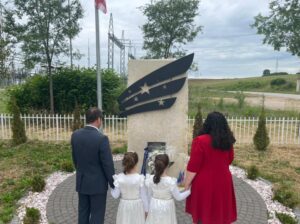 A two-member Apache crew was killed in 1999 when a helicopter crashed during a training exercise in Albania, about 50 miles from Rinas Airport, the New York Times reported.

The pilots were also the first victims of the NATO alliance during the bombing of the former FRY. The NATO alliance claimed that the day before the accident was the “most successful day” for these forces.

This #MemorialDay weekend we remember @USArmy pilots David Gibbs & Kevin Reichert who died on May 5, 1999 when their Apache helicopter crashed during Operation Allied Force. @UsAmbKosovo visited their Prizren memorial to honor their bravery & sacrifice. https://t.co/jHBx4vRKQs pic.twitter.com/VzhL6IhlY5

Meanwhile, a commemoration of the anniversary of the death of ten civilians during the 1999 bombing of the bridge on Velika Morava was also held today in the Serbian town Varvarin near Krusevac city (south Serbia). This commemoration is organized every year as the event symbolizes one of the most remembered tragedies of civilian casualties of NATO airstrikes against FRY.

Each year, the valedictorian in Morava lays a wreath at the site where the bridge was bombed.

Varvarin was shelled twice the same day within a short timeframe. It was a market day and the feast of the Holy Trinity. The youngest victim was 15-year-old Sanja Milenkovic, one of the best students at the Mathematical Grammar School.

The families of the victims lost their court cases before the international courts related to this crime.