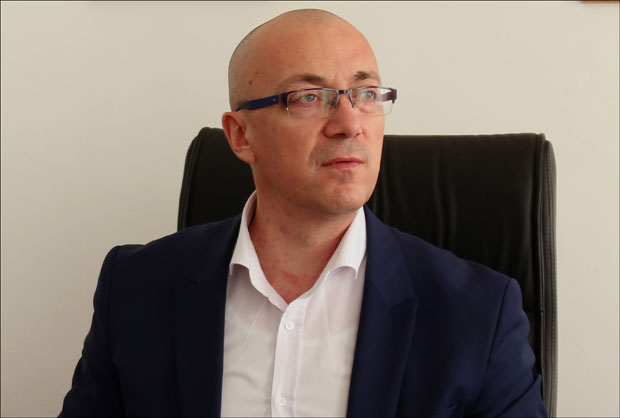 „Let others laugh, somebody has to do the job. In the coming weeks, we will open a regional landfill with a €5 million investment,“ said the mayor of North Mitrovica, Goran Rakic. His statement comes after a real commotion on social networks and in the media throughout the region,  following  the news that he cut the red tape at the official openning for the new garbage container shelters that were recently installed, which his senior deputy announced  to be the start of a „new era of waste management“. Goran Rakic is also the chief of the most influential Serbian political party Srpska Lista and the leading Serb politican in Kosovo.

After the ceremony of the opening the garbage container shelters, he listed a number of success stories:

„The development of Kosovska Mitrovica has started after 14 years of stagnation – in 2014, the improvement of the living conditions of the people of  Mitrovica and infrastructural improvements took place. In the past three years we managed to reconstruct and equip all educational institutions, from pre-school, primary, and secondary to high school education premises. We invested over €700,000 in the university medical centre in Kosovska Mitrovica. We employed more than 300 young people, built up sidewalks and installed street lighting. After 18 years we built a bus station. The construction of a sport hall and a fire station are expected to be completed soon. “

The mayor also explained that the first phase of the new dump project meant „the installation of new garbage containers and arranging the space around them.“

To others, including „some media“ he raised objections:

„Unfortunately, it was left unnoticed by some media…..they have noticed only in the last few days that we started activities to resolve the municipal waste problem and they tried to make a mockery out of it.“

He criticized those who, he belived, „did not want to report“ on this.

„However, our citizens have been denied the most important information, which some have deliberately refused to report on – that Kosovska Mitrovica will, after 19 years on standby, build a regional dump with a €5 million investment. This will, on one side, solve the problem of municipal and medical waste, and on the other hand over dozens of jobs. “

The Kosovo mayor added in conclusion:

„We will be happy if all those who reported initially in mockery of this progress will report this announcement as well, because the citizens expect full information from all of us, politicians and the media.“

KoSSev has not received today’s press release. For a year, our media organisation has been ignored by the mayor’s office and Srpska Lista, and recently by the Mitrovica municipality as well. They have unilaterally cut communication with KoSSev’s journalists on a professional level. In addition, the mayor confirmed himself in a written message to KoSSev’s editor on 16 July last year, that he would also continue the practice of „omitting“  KoSSev media personnel from the media list upon him taking the presiding position in Srpska Lista.