In early February, the announcement of the initiation of the restoration works on Xhafer Deva’s house in South Mitrovica caught the attention of the public and media, both in Kosovo and Serbia, as well as in the region and beyond.

The project, which was supposed to be implemented by the Kosovo Ministry of Culture along with the EU and UNDP, has since been canceled, after several parties, including the German ambassador to Kosovo and the EU rapporteur for Kosovo, highlighted Xhafer Deva’s role as a Nazi collaborator.

The decision was met with dissatisfaction from part of the Kosovan public, which also criticized the German ambassador, Jorn Rohde. Despite the project cancellation, the Kosovo Minister announced that he will not give up on the restoration as Kosovo has enough money for it, but that the work must continue with international partners.

The German ambassador was also criticized for „causing damage“ to Kosovo by allegedly wrongly connecting Deva and Kosovo with the Holocaust denial.

Meanwhile, Kosovo officials, publicists, and experts have repeatedly claimed that Kosovo Albanians protected Jews during the Holocaust, while also boasting to the Israelites about it.

A document with slightly different content, however, can be found in the Jewish Historical Museum in Belgrade, in the Holocaust Fund (Holocaust Fund, K – 22, 1a – 3/9, reg. no. 3728), which also recently garnered media attention.

Courtesy and with the permission of the Jewish Historical Museum in Belgrade, KoSSev publishes the scanned pages of the document that were submitted to us by the museum.

The document was penned by Yugoslavia’s Commission for Determining the Crimes of Occupiers and their Collaborators, which was founded on November 30th, 1943 at the Second Session of the Anti-Fascist Council of National Liberation of Yugoslavia, and tasked with collecting evidence of crimes committed in the territory of occupied Yugoslavia.

The work of the State Commission included the collection of data on the crimes of the occupiers and their associates by local authorities. Witnesses and suspects were questioned before the commission, and their testimonies were later used as evidence in the event that the prosecutor decided to initiate court proceedings.

The document we publish below testifies to the fate of the Jews from Kosovska Mitrovica, which was part of occupied Serbia under German military rule from April 1941 to November 1944.

During this time, Xhafer Deva served as mayor of Kosovska Mitrovica. In November 1943, following the capitulation of Italy and the establishment of German patronage over Greater Albania, Deva was appointed Minister of the Interior in the Albanian government. From September 1943, Xhafer Deva was one of the leaders of the Second League of Prizren, an organization founded with Germany’s help. It was tasked with guarding the borders of Greater Albania and fighting for the annexation of territories that Albanian nationalists believed belonged to them.

3/ In March of 1942, the Germans took 23 families to Germany. To date, none of them have returned, nor is there any information about them. It is suspected that none of them survived, since they were initially interned; because few people returned from German internment (cf. camps), even the Jews who were interned during 1943 and later, following Italy’s capitulation.

Even during the German occupation, 6 families fled from Mitrovica to Pristina, which was under Italian occupation, and later they were taken, together with the Jews from Pristina, to the camp Berat in Albania. All 6 families returned to Mitrovica after the liberation; only one young man, Jakov Lazar, died in the Berat camp. No one spent time in exile;

5/ Of the 23 families with 88 members, who were taken away by the Germans in March 1942, there is no information about whether any of them are alive, nor is it known where they were taken, on the contrary, it is presumed that none of them are alive;

6/ Although inconclusive, it can be certainly assumed that 23 families with 88 members are not alive;

7/ Of the 6 families who were in Berat, all 25 members are mentally healthy, while in a quite poor physical condition, but without any particularly serious illnesses;

8/ Those who returned have nothing because everything they had was looted;

9/ As soon as the Germans came to Mitrovica, they immediately displayed the inscription „Judengeschäft“ on all Jewish shops, which meant that every German was free to plunder them. All Jewish people were made to wear red ribbons with the inscription „Jude“ on their arms. This inscription signified their racial segregation. At the same time, it was a facilitating measure in locating Jews, even on the street, for jobs and activities required by the Germans; it was a facilitating measure for the rapid retrieval of Jews for the purpose of mass retaliation in the event of any incident and street incident, often intentionally provoked; it was a mitigating measure while attacking the Jews.

On May 20th, 1941, Xhafer Deva issued an order, as per which all property was confiscated from the Jews and passed into the hands of the state. All Jewish property was placed under the Commissariat for Jewish Property. Commissioners were immediately appointed to all Jewish shops.

The Jews from Mitrovica were not massacred and killed while they were in Mitrovica. They were exposed to the whims and greatest possible humiliation by both the Germans and our people who were in the service of the occupiers; it meant nothing to approach a Jew on the street and slap him for no reason; it was a regular occurrence; going into Jewish apartments and forcibly confiscating their belongings, seizing and damaging them; the Jews were forced to stay in their apartments the entire time they were in Mitrovica, constantly fearing the worst.

Among our citizens, associates of the occupiers, who particularly stood out in the pilfering of Jewish property, in committing the most brutal and disgusting looting, even during the time, was Ibraimovic, aka „Solid“, who was particularly zealous in these crimes – he was the head of the Commissariat for Jewish Property in Mitrovica – he closed the Jewish church, burned all books, the complete archive of the Jewish community, seized all valuables from the Jewish church, but he also received the deserved punishment – he was executed. The Jews in Mitrovica did not have any capital at their disposal, except for the money in the form of former Yugoslav banknotes, which was seized by the Commissariat for Jewish Property.

Of the Jews from Mitrovica, Matilda Ruben was shot and killed; she was a girl who tried to flee to Pristina, while wearing a traditional Muslim dress but was captured in Vucitrn and shot at a barracks in Mitrovica.

Of the Jews outside Mitrovica, the Konforti family, 3 women and 2 men, were shot in the barracks in Mitrovica in January 1942; this family was brought from Duga Poljana, Sjenica – Novi Pazar. According to the testimony of the Jews from Mitrovica, Mosa Bahara was shot on the way to Mitrovica in February 1942;

10/ In August – September 1941, Jews – all men were sent to the camp in Kosovska Mitrovica, except for 6 families who fled to Pristina. All Jews from this camp in Mitrovica: 23 families with 88 members were transported to Germany. How they were treated in Germany can be ascertained only by the general way Jews were treated in Germany, because specific data are lacking, since none of them returned.

The life of the Jews in the camp in Pristina was particularly difficult and unbearable – they were under the direct command of the Shiptar authorities – the Quaestors in Pristina. The abuse and harassment of Jews increased daily. The Albanian Kosovo Fascist Committee and the Quaestura particularly harassed the Jews. The persons who took a prominent and selfless part in it were Malus Kosova, the head of the Albanian Committee from Pristina, Cemal beg Ismail Kanli, Major, Chief of Police in the Quaestors from Pristina, Rashid Memedali, President of the Municipality of Pristina, Rifad Shukri Ramadan and Mahmud Shaban Pasic, members of the Committee, Sadik Galumunu, Deputy Mayor, Hussein Pristinac, Prefect of Pristina, Jahja seh Asan, Member of the Committee, Bahari Kafedjija, Agent of the Committee, and Raif Tutarak, Agent of the Quaestors in Pristina.

From the camp in Pristina, all Jews were taken to the Berat camp – Albania, where they awaited the capitulation of Italy. In the Berat camp, they were under the command of the Albanian-fascist authorities. The persecution and abuse of Jews continued in this camp, once again carried out by Shiptars – fascists from Kosovo who, as collaborators and agents of occupiers, had free movement throughout Albania, and by the German Gestapo. Daily beatings: with clubs, slaps, lootings, daily threats and insults, ethnic slurs, all daily forms of humiliation – resulted in Jews feeling terrified and expecting the worst. The main organizer of all these atrocities was Xhafer Deva.

Approximately 400 people were situated in the Berat camp.

After the capitulation of Italy, the Jews fled from the camp, each his own way, some fled to the forest, and most of them went to Durres, Kavaja, Tirana, Shkodra, Berat and other places.

A total of 12 families went to Shkodra, where the 6 families from Mitrovica were located. They lived on the outskirts of the city; they were very often the object of torture of domestic and German brutes and villains; they were arrested mostly by party, because the goal of the arrest was torture and looting, and they were released with blackmail; they were beaten in prisons, parents were taken to prisons and separated from their children, and helpless children were left to fend for themselves in barns and hovels located on the outskirts.

Intrusions into hovels located on the outskirts, where Jews lived, beatings, abductions and looting were common. One example of the most ruthless thievery: while several Jews were in prison in Shkodra, Captain Hoffman Führer, head of the Gestapo in Shkodra, told them on May 29, 1944 that they will be shot, but he added that they can only save themselves if they pay 25,000 Napoléons. The Jews collected 300 Napoléons and handed them over to Hoffman, while they were set to pay the rest later.

Among the figures which stood out in committing such atrocities, in addition to Hoffman, were Ramo Tutic, Hasko Ethem Cerkez and Mustafa Abdurahman Karasanovic – all three agents from Kosovska Mitrovica. Under these circumstances, this group of Jews from Mitrovica waited for the liberation and after the liberation, they returned to Mitrovica, where they still live today. 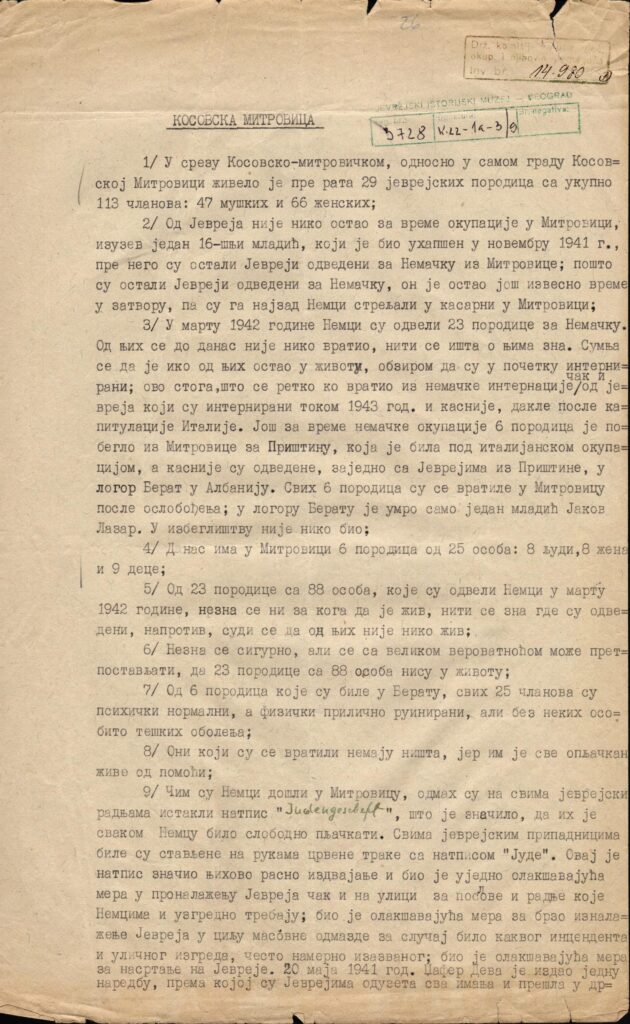 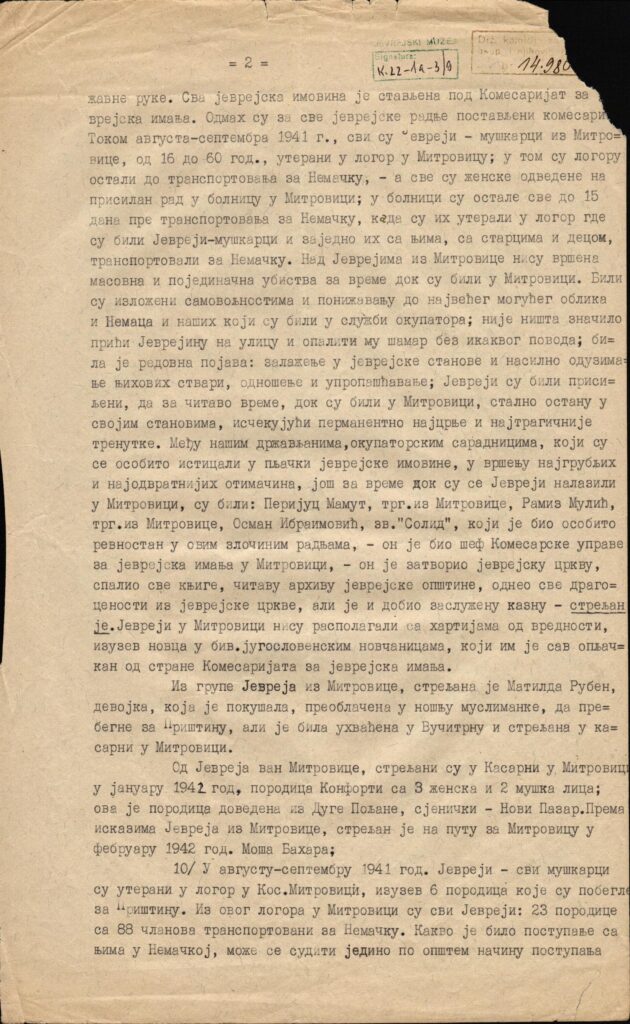 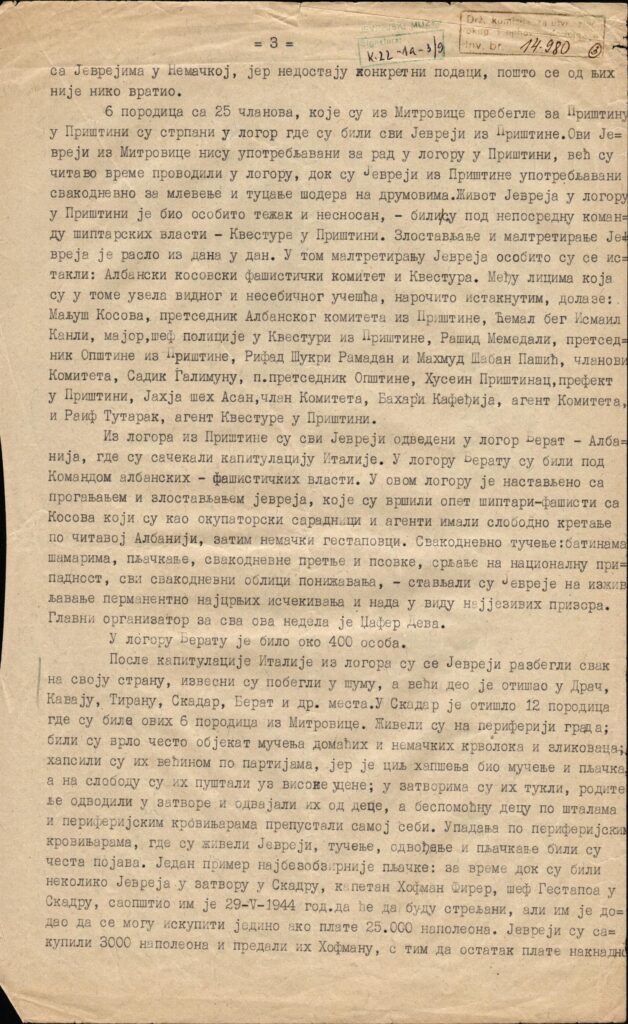 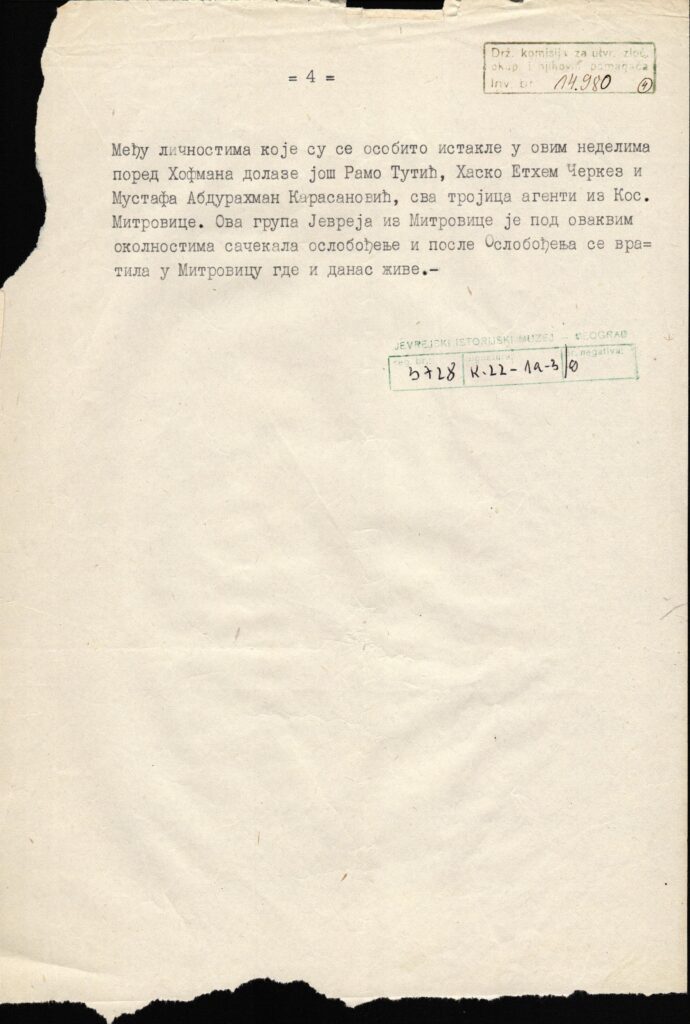