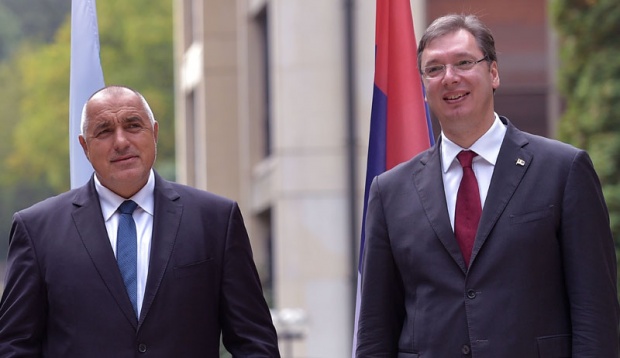 “Our friend Bojko told me yesterday, and I didn’t even know he was keeping track of all our statements here, that they see and know all of that in Europe, so there was this statement on guns, Greater Albania, and everything else, so Bojko told me, and he won’t get angry about it – says Bojko – I could see you were gritting your teeth, but what came out was good and it was good that you called for peace. So we will try and send such messages out in the future, and thank you for noticing it”, Serbian President Aleksandar Vucic continues in the same peaceful spirit during his visit through the region today – this time, after meeting with the Bulgarian PM, Bojko Borisov. I don’t speak of guns as Hashim Thaci does, conveyed Vucic yesterday from Mostar regarding Thaci’s statement earlier that “threats from Serbia” would get responded to as “they were 19 years ago” – “with guns”. Regional leaders have gathered in Mostar for the 21st International Economic Fair with Serbia as co-organizer.

"As a Balkanian, I know how hard it is for Vucic and I know he puts in huge efforts to preserve the peace in the region and continue with the integration processes. I hope that colleagues in Kosovo will keep up the same spirit. Provocations and conflicts lately are concerning for all of us, since the wounds have not yet healed”, stated Bulgarian PM Bojko Borisov after talking to the Serbian President Aleksandar Vucic.

Borisov noted that „prospects are not optimistic“ and that one could „rather say there is something bad ahead, while this was not the case only a couple of months ago“.

"I call upon the entire region, we have to be reasonable, since consequences would be far reaching for the entire Balkans. A conflict would not avoid any of the countries, and Bulgaria has had decades of setback due to the war in Yugoslavia”, the Bulgarian PM said.

Borisov also said that the EU summit will take place on May 17 in Sofia „together with the Western Balkan colleagues“, adding that he was convinced there would be a way for Kosovo’s President Hashim Thaci to attend the gathering.