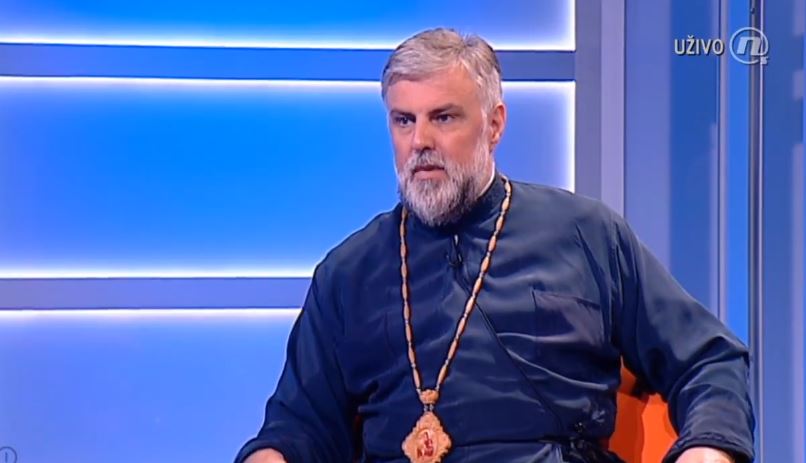 „A man who played the role of a lion for this people – guiding and protecting them – was killed, whether he was in power or not. Why was he killed? So that the hyenas can rule and eat everything that can be eaten,“ Bishop Grigorije of Dusseldorf and Germany said last night on the famous “Utisak Nedelje” talk show on Nova S TV, speaking of the assassinated Oliver Ivanovic.

Bishop Grigorije stressed that he took Ivanovic’s death “pretty hard,” a topic he previously wrote about in his recently published book – “Let us watch each other in the eyes“. Writing about this assassination he claimed that whoever is marked as a traitor by the secret services definitely isn’t one.

Serbia should also take care of the Albanians in Kosovo, the bishop said yesterday, repeating that every person must take care of another and have “the eyes for the tragedy of others, not only of his own”.

„Because he (Ivanovic) wanted to live with Albanians, because he spoke Albanian. Because he was not afraid of the Albanians, but he told the Albanians that they should not be afraid of him. Such a man was killed from behind,“ he said, speaking of the hardness of the tragedy to him personally and the motives for the crimes.

„I always had the sense that there was a man there. And then that man was killed. A man who played the role of a lion for this people – guiding and protecting it – was killed, whether he was in power or not.“

When asked by one of the most outstanding Serbian journalists Olja Beckovic what he would say to someone who told him to open his eyes knowing that over 90% of Serbs who voted in the recent Kosovo snap parliamentary elections voted in favor of the ruling politics, he replied:

„My focus is on theology, but I’m really not blind to politics either. Bragging about the result of over 90 % in the 21st century is – to say the least, nonsense and shameful. That is what I say to the person who tells me to open my eyes,“ he said.

When democracy reached its flipside

„Now I tell him – open your eyes. What does it mean when someone gets 97%?! Is that possible, how is that possible?! How did we come to such a result? I keep thinking of a conversation, after some local elections were finished, of one man bragging – we won in Ljubinje (a place in Bosnia and Herzegovina) and the other man telling him – we didn’t win, we bought (the votes), and that’s the end, that’s when democracy reached its flipside. But to be so stupid as to brag that you got 94.67 % in elections in the 21st century, one must be really stupid,“ Bishop Grigorije added.

Bishop Grigorije said also that it was a mistake to present a church decoration to the Serbian president at the 800th anniversary celebration of the church’s independence.

“The presentation of the medal to Serbian President Aleksandar Vucic at the celebration of 800 years of the Serbian Orthodox Church’s independence was a mistake which failed to respect the greatness of that anniversary.”

“The Church has an interesting but good custom which does not allow weddings on Christmas, Easter or other holidays because that demean either the wedding or the holiday…It seemed to me that it (the presentation of the medal) was a terrible mistake which failed to show respect for the 800th anniversary and suddenly the decoration became more important than 800 years of the church,” the bishop said.

He emphasised it shows that “we are at a stage when no one is allowed to be different which is completely the opposite of what the world has achieved today”.

“We have to preserve diversity. Whoever wants to destroy diversity and cover everything with their own personality creates divisions. My view is – don’t create divisions,” he said.

Grigorije said the meeting in May 2019 between church elders headed by Patriarch Irinej with Vucic and Bosnia-Herzegovina Presidency member Milorad Dodik (a former president of the Republika Srpska) collapsed when one of the bishops voiced a different opinion.

On needs for humans to be free thinkers

He said he was not scared by Vucic’s statement that he knows exactly which bishops are opposed to him. “I will get up every morning and say I don’t agree with you. That means that every man should and has to say that he is not a sheep that the wolf has a right to. I want to be a person and I want to build a community, not as a servant but as a being, as Grigorije. That is what I advocate and that is what should happen here,” he said.