The eighteen-year-old son of a Kosovo Serb politician, Nenad Rasic was attacked yesterday in the yard of a high school in Laplje Selo. Officials from Pristina and Belgrade – as well as international representatives – harshly condemned the attack. Their stance on the motive behind the attack, however, greatly differs. While Pristina, some opposition politicians from the Kosovo Serb community, and also the father of the injured Nikola, believe that the attack has a political background and that it is connected to Belgrade and Srpska Lista. The Kosovo Office and the party which has the greatest support of Kosovo Serbs – Srpska Lista claim that it is “spin” and “child abuse for political purposes.” They also alleged that the fight was organized and not an attack on Rasic’s son.

After yesterday’s incident in Laplje Selo, eight people were arrested and detained for 48 hours.

The parents of the young men who were detained told RTV KiM that the incident was caused by Nikola Rasic himself, and that the whole case contained a political connotation.

Numerous Kosovo officials have reacted to yesterday’s incident in Laplje Selo, a village in central Kosovo. The leader of Self-Determination, Albin Kurti linked the beating of Nikola Rasic with the political activities of his father. „He (cf. Nenad Rasic) did not break down or succumb to pressures and threats from Serbia,“ Kurti said.

Vjosa Osmani, the acting Kosovo president, said that the case is a “continuation of numerous threats and illegal interventions of Serbia in Kosovo“ which are aimed at „intimidating Serb citizens“.

The PDK leader, Enver Hoxhaj also condemned the attack, calling on the competent authorities to investigate the case and arrest the attackers. He noted that this was the latest case in a series of harassments against Serb opposition in Kosovo.

The violence is unacceptable, the outgoing Kosovo Prime Minister Avdullah Hoti said today, adding that the perpetrators must be brought before the law.

„The news of an attack on the son of Nenad Rasic is sickening whatever may be the motivation. Such violence, whether physical or verbal, is unacceptable against anyone, but is particularly shocking against a young person. I ask that the Kosovan Police investigate, he tweeted yesterday.

Today he continued: „Yesterday’s senseless attack on Nenad Rasic’s son has, unsurprisingly, been perceived as a political act. The British Embassy and other international partners have, for some time, been calling for a calmer, more reasoned, less personal political debate. Some politicians have promoted a culture of hate and fear, mistrust and treachery, within and across different communities.  We call again for this to stop. All in the political class and media should reflect that allowing such a culture to develop puts people at risk“.

The German ambassador Jorn Rohde fully agreed with his UK colleague’s initial statement and tweeted: „Regarding the recent incident in Llapnasella/Laplje Selo – important for law enforcement to fully investigate. All actors need to refrain from inflammatory language. Hate speech is dangerous. Working together towards a joint future for all in Kosovo is key“.

The Italian ambassador to Kosovo, Nicola Orlando also commented, “the politically motivated aggression against the son of the Leader of the Progressive Democratic Party, Nenad Rasic,” noting that it is an attack on democracy itself.

Fr. Sava: These people are not Serbs, they are inhuman

“These people are not Serbs, they are inhuman,” the abbot of Visoki Decani monastery, Sava Janjic also reacted this morning.

“This is so terrible and shameful that we should ask ourselves who is manipulating young people; who is beating opponents, should some other Oliver be liquidated again? (…)” – he said.

Read more: Father Sava: These people are not Serbs, they are inhuman

Belgrade-ordered beating or is it child abuse for political purposes?

„What hypocrisy of SL! Yesterday, the President of Serbia, Vucic personally referred to Nenad Rasic and me as ‘traitors’ in front of the media. Today, Nenad’s son was brutally beaten on his way out of school, and I was informed that the Serbian Ministry of the Interior is canceling my security team because I am no longer ‘in jeopardy,’” Kosovo Serb politician, Rada Trajkovic commented on Srpska Lista’s statement condemning the attack on Rasic’s son.

According to the Kosovo Serb Party, the attack „was an ordered mafia beating. A beating ordered by Belgrade and SL, and carried out through manipulated young men of Serbian ethnicity.“

They demanded that the case is resolved as soon as possible and for the perpetrators to be brought to justice.

Two opposition parties in Serbia, the Party of Freedom and Justice and the Oslobodjenje movement, reacted, condemning the attack and demanding that the perpetrators be identified. Both opposition parties also compared the incident to the murder of Oliver Ivanovic.

Srpska Lista also strongly condemned the fact that the incident was linked with Belgrade and Srpska Lista.

„Nikola Rasic sustained injuries in a fight that was agreed and organized in advance between two groups of young men, and Nikola Rasic was a member of one of those groups,“ SL wrote in a statement.

They emphasized that the fight had nothing to do with politics and SL:

„No matter how hard Albin Kurti and Nenad Rasic tried to present it as such to gain some political points, trying to tarnish the magnificent victory of the Serbian people in the elections through support for SL.“

The largest Kosovo Serb party said that they did not believe that Nenad Rasic was „willing to abuse his own child in order to gain cheap political points – but that is a matter of his honor and character.“

„Is participation in Kosovo politics a matter of life and death?“

The Association of Montenegrins „Lovcen“ posed the question as to „whether participation in Kosovo politics is a matter of life and death.“

„Was what happened to Oliver Ivanovic not enough and is this case that happened today a continuation of that policy?“ the association said yesterday.

This Office said that „synchronized and orchestrated attempts from Pristina“ to present the attack „as a kind of alleged political showdown with Nenad Rasic is a common spin and child abuse for political purposes.“

They also alleged that Albin Kurti’s reported attempt to use the situation to attack Serbia and SL is “the peak of hypocrisy and impudence”.

„They are trying to criminalize SL with false accusations, all because of the convincing support of the people and the success of the elections, which they are not being forgiven for,“ the Kosovo Office concluded.

SL chief Goran Rakic also issued another statement, saying that Pristina is exerting „new pressures on SL and the Serbian people“ which are „orchestrated and ordered by Albin Kurti, and realized through his followers, above all Rada Trajkovic and Nenad Rasic.“

What did Rasic say on the incident?

Nenad Rasic himself told Pristina media yesterday that he „accepted that he had to pay the price of the ideology he represents“, but also that he did not expect that his son would „pay such an unnaturally high price“.

He also held a press conference in the Media Center in Caglavica today. While emphasizing that he does not want to prejudge the outcome of the investigation, Rasic stressed that he wants the case to be resolved as soon as possible. He also expressed doubt that the attack has a political background.

This Kosovo Serb politician called for an objective investigation, adding that everyone who is guilty should be held accountable.

Rasic presented his view of the events that preceded the fight and the events during the fight itself. He said that a group of 30-50 young attacked his son and friends, as a result of which he suffered severe bodily injuries.

He also shared photographs of social media posts of a person who was reportedly part of the group that took part in the fight which, according to Rasic, reveal that the fight was organized.

Moreover, he expressed suspicion that some politicians made the situation worse with their „irresponsible statements“. That is why, as a possible cause of the incident, he reported the statements of some of the politicians, including the Kosovo Minister for Communities and Returns, Dalibor Jevtic, to the prosecution.

Finally, he called on all politicians to stop with labeling because, as yesterday’s event proved, it can have great consequences.

Vucic on the fight in Laplje Selo: We have all the information, two groups of young men organized the fight 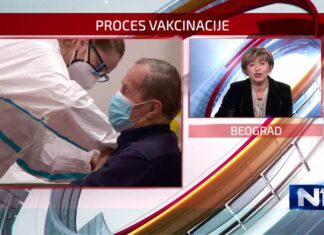