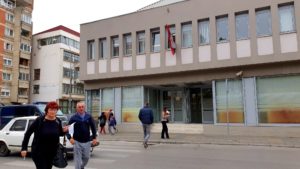 The Leskovac Basic Court dismissed the head of the Kosovska Mitrovica Provisional Authority, Aleksandar Spiric’s lawsuit against the editor of the KoSSev portal, Tatjana Lazarevic for intentional infliction of emotional distress as unfounded. Spiric filed the lawsuit in connection with an article headline from May 2017 – “Protesters of the Economic School: Spiric is behind the armed attacks? Headmistress: If this is not sorted – it will have to be shut down!“ According to the court’s decision, Spiric is obliged to pay 29,000 dinars to Lazarevic for legal expenses. This judgment is not final and the parties have the right to appeal.

The head of the Provisional Authority filed a lawsuit against the KoSSev editor, Tatjana Lazarevic and the chairman of the strike committee of the Economic School, Aleksandar Janicijevic, seeking compensation in the form of 5,000 dinars for „suffering mental pain as a result of personal rights violations“.

Spiric sued Lazarevic „because of the title,“ and Janicijevic over a statement he made to the KoSSev portal which he described as „simply not true.“

He claimed that the sentence in the headline was „grossly taken out of the context of the article“ and that it had caused him „intangible injury by violating his personal rights.“

The court decision, however, reads that it is an „indisputable fact“ that, prior to the publication of the article, Lazarevic „obtained a written statement from the strike committee of the Kosovska Mitrovica Economic School signed by Aleksandar Janicijevic and that before the article was published, she checked everything and interviewed everyone she was supposed to. She basically obtained the title of the article from the context of the explanation, without adding her own comment and opinion as editor-in-chief.“

As for Janicijevic, the court found that he „only signed the public notice of the strike committee of the Economic School, and that he did not, in his personal context, present any insults that would harm the honor and reputation of the plaintiff Spiric.“

The court found that Lazarevic and Janicijevic „do not have any subjective liability for any damage or injury to the plaintiff Spiric.“

During the court proceedings, Lazarevic’s lawyer, Nebojsa Vlajic emphasized that the purpose of the lawsuit was not to compensate for non-pecuniary damage, but to “discipline an independent and objective media such as KoSSev,” and to “prevent reporting on topics that local officials and politicians find uncomfortable and to influence the editorial policy of KoSSev.”

However, Spiric’s lawyer, Dejan A. Vasic, disputed these allegations by saying that this claim was „naive in its pretentiousness for several reasons“:

„Namely, anyone who monitors the work of the media knows full well that all media are dependent and that an independent media do not exist, at the very least, they are dependent on their sources of funding. In this sense, the web portal – which the defendant is the editor of – may above all be called an opposition-oriented media rather than an objective and impartial media. After all, the outcome of this procedure will give an assessment of its objectivity.“

Assessing the quality of the article and Lazarevic’s journalistic skills, lawyer Dejan A. Vasic shared his belief that the article is „too long, indiscriminately crammed and unclear, which is a characteristic of the first defendant’s journalistic style“.

„For example, the ‘Vreme’ weekly magazine, which is characterized by its longer articles, has certainly never published a 7-page-long article. After all, the first defendant will also remember that in our private conversations, I jokingly pointed out that while writing news she does not know how to separate the essential from the irrelevant. And that, in my opinion, is characteristic of journalistic dilettantism and lack of talent,” Vasic said.

He then suggested that the judge should „arm with patience and read the 7 pages of this article as someone who is not familiar with local issues, and to see for himself that nothing can be understood from this pile of superfluous words“.

On the other hand, attorney Vlajic shared an opposite view:

„This represents a deep misunderstanding of the essence of the media, the right to freedom of the press and the role of the free media in modern society shown by the prosecutor and anyone who supports him in such court proceedings. If such ideas and aspirations, as shown by the filing of this lawsuit, were accepted in our society, it would mean severe regression and not only lagging behind modern, prosperous and democratic states, but the civilizational defeat of a society that cannot move forward where it should be.“

While agreeing with Vlajic’s assessment that free reporting is a heritage of democracy, Spiric’s lawyer, Dejan A. Vasic, however, pointed out that „there must be a limit and decency even while exercising freedom.“

The lawsuit against Aleksandar Janicijevic was also dismissed by the Leskovac court.